Kathleen Wynne will fight the next election over a promise to raise taxes to build transit, staking her premiership on the belief voters will accept short-term pain to finally break the gridlock crippling Southern Ontario.

The move, which the Premier acknowledged is a risky one, would allow her to solve one of the province's largest and most persistent problems, as well as form the basis for a strong legacy.

"I'm not going to pretend that it's easy to go to people and say 'well, we actually have to find a way to pay for this,'" she said in an interview at her Queen's Park office Thursday, the last day of the fall legislative session. "But it has to be done. We have to do it, or else we're not going to have the transit that we need."

This ambitious program, which would see tens of billions of dollars of new construction, is the sort of hefty task Ms. Wynne wanted to tackle when she succeeded Dalton McGuinty in February. Instead, she has spent much of the intervening time solving daily political problems in a fractious minority parliament.

She settled an acrimonious labour dispute with the province's teachers, reached a budget agreement with the New Democrats that avoided an election earlier this year, and used a mix of deal-making and public shaming to get the Progressive Conservatives to allow a pile of legislation to pass parliament.

Just this week, she confronted another bombshell, when the Auditor-General revealed big bonuses and rich pensions at Ontario Power Generation. Ms. Wynne responded with a proposal that would allow her government to directly control compensation at the electricity agency.

"It's part of the job that I work with the record we bring to the office. … I am not abdicating responsibility," she said. "In the case of OPG, there have been government after government that have made changes [but] the culture hasn't changed. We need to shift that culture."

There is a certain irony that a wonkish intellectual has so far made her most significant mark as a canny political tactician. And she insists she is a better Premier for having confronted these problems.

"Yes, there have been fires that we've had to put out," she said. "And I knew that; I knew that when I came in. But every single one of those issues, we've had the opportunity to learn from."

And now, as she pivots to the substantive policy she promised when she first came to power, she will have to muster all of these political skills to sell Ontarians on her agenda.

Next week, Finance Minister Charles Sousa will try to broker a deal to enrich the Canada Pension Plan. If he cannot, Ms. Wynne has pledged to create a new pension of Ontario's own, asking workers to pay more in exchange for richer benefits on retirement.

But selling even that substantial change will pale in comparison to the battle she is preparing to fight over transit.

Ms. Wynne has not yet decided what exact taxes, tolls or fees she will propose – everything from a gas tax to a commercial parking levy is on the table – but pledged to bring forward a plan in the spring budget.

The PCs are against any new revenue-raising measures, while the NDP opposes everything but a corporate tax hike, making it all but inevitable they will vote Ms. Wynne's budget down and force an election.

And when they do, the Premier has already prepared her pitch to voters.

"Implementing our jobs and economy plan is about investment … it's about investing in infrastructure, and obviously transit is a huge part of that," she said.

That she is still in office to make this case – after the turmoil of the past year – may be her single largest achievement to date.

"You know, it doesn't feel like a year. It feels much longer," she said. "There were people who didn't think we'd be standing at this point, that would have thought we had not a chance to actually get here." Driving for dollars, away from Toronto gridlock
December 12, 2013 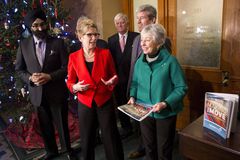 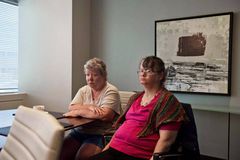