Kevin O'Leary says he has been interviewing potential campaign managers and meeting with fundraisers and strategists as he continues to contemplate joining the federal Conservative Party leadership race in the wake of president-elect Donald Trump's victory.

The Toronto businessman and reality-TV star said Wednesday that Mr. Trump's win in the United States "puts Canada in a horrific place" and is contributing to his view that the 2019 federal election will now be a "really strong contest."

Read also (from the archives): Why Kevin O'Leary's comments about Rachel Notley are so off-base

Read also (from the archives): Kevin O'Leary: He's not a billionaire, he just plays one on TV

"Trump is going to force Canada to be competitive, and we have the wrong leadership to do that," Mr. O'Leary said in an interview.

He said the president-elect's promised policies, including lower taxes and withdrawing from the Paris Agreement on climate change, coupled with Prime Minister Justin Trudeau's carbon-pricing plan will make Canada "the most uncompetitive jurisdiction in North America."

"I want to have some effect on economic and fiscal policy. The more I watch what's happening, the more motivated I am to do that. And a lot of it is the result of seeing what happened in the U.S. election," Mr. O'Leary said.

As part of his leadership discussions, he recently met with Martin Goldfarb, the federal Liberal Party's pollster between 1973 and 1992 and a key adviser to former prime minister Pierre Trudeau.

Mr. Goldfarb confirmed the meeting took place a few days ago but said he has "no interest in doing anything with Kevin O'Leary."

"He came to see me about fundraising and whether I would be interested in running his campaign. And I said, 'Not in a million years,'" Mr. Goldfarb told The Globe and Mail.

Mr. Goldfarb said he believes Mr. O'Leary is serious about running. When asked if he's a credible candidate, he said, "In today's world, who knows? … There's no such thing as an 'uncredible' candidate after they elect Trump. And do I think we're different? Come on, we elected [former Toronto Mayor] Rob Ford. So I don't know what credible means any more."

He said his discussion with Mr. O'Leary was brief "but cordial."

"Look it, he's an engaging personality, so I like him. He's fun to talk to. But we are a long way apart on the kind of country that we identify with," he said.

Mr. O'Leary said he didn't ask Mr. Goldfarb to join his campaign but was simply interested in hearing about the senior Trudeau's years.

"I wanted to learn from the grand wizard he is," Mr. O'Leary said. "I'm going to see other people from that era, too, because I'm a student of history. There's no question about it. I like to learn from the past. I don't make the assumption I know everything."

Mr. O'Leary has also had discussions with Todd Halpern, a wine importer and vice-chairman of the Toronto General & Western Hospital Foundation, as well as the chairman of its billion-dollar fundraising campaign.

"If I went out for dinner with him one evening, I could raise all the money he needs without a question," Mr. Halpern said.

Mr. O'Leary, who said he is still willing to back another candidate in the race, said he has also had detailed discussions with the Conservative Party about the rules and timing of the race.

Party spokesman Cory Hann confirmed that Mr. O'Leary has been in touch. "We've had discussions with many of the current and potential candidates about the rules and process involved in this race, and that includes Mr. O'Leary," Mr. Hann said in an e-mail.

Mr. O'Leary, who shares a reality-TV producer with Mr. Trump, said he would be able to stand up to the president-elect, unlike Mr. Trudeau. "That is Godzilla versus Bambi," Mr. O'Leary said.

"I spend 182 days [a year] in the States. People say to me: That's a disadvantage. No, it's not. They're our biggest trading partner and now our biggest competitor. You need strong leadership to negotiate with somebody like that." 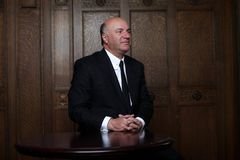 Conservative leadership candidates offer contrasting approaches to climate change
November 18, 2016
Lisa Raitt launches bid to become next Conservative Party leader
November 2, 2016
Follow Laura Stone on Twitter @l_stone
Report an error Editorial code of conduct
Due to technical reasons, we have temporarily removed commenting from our articles. We hope to have this fixed soon. Thank you for your patience. If you are looking to give feedback on our new site, please send it along to feedback@globeandmail.com. If you want to write a letter to the editor, please forward to letters@globeandmail.com.
Comments