It's almost as if Jack Layton is feeding off the frenetic energy of the election campaign.

But, even as the NDP Leader's health rebounds after hip surgery he had in March, even as he has dropped a forearm crutch in favour of a cane and increased the number of whistle stops his campaign makes each day, his efforts to attract voters seem to have hit a wall.

At the end of the week, a poll by Nanos Research suggested national support for the New Democrats was at 14.9 per cent. That's five points below where they were on March 15, and a full 16 points behind the Liberals, their main rivals for centre-left sentiment.

Mr. Layton says he doesn't talk about polls. They're "bouncing all over the place," he said at a campaign stop near Victoria Friday, the panoramic Strait of Juan de Fuca stretching out behind him. "They are like needles on a gas tank that's just about empty on a bumpy road in an old car."

They are also like needles in the eye of a party that has tried so hard to cast itself, and not the Liberals, as slayer of the Conservative dragon.

NDP officials point to other surveys that show them in a better position. But, as the campaign heads into the debate-week lull, the New Democrats are, at best, in a period of stasis and, at worst, seeing the ground slip from under them as strategic voters drift to Michael Ignatieff's Liberals.

Mr. Layton's message to Canadians is that you can't trust that guy or his party. Liberals say one thing and do another, he tells reporters and supporters.

"People are increasingly coming to the conclusion that Ottawa is broken and that ours is the party that can fix it," he said on Friday. "Going back to the same old parties of the past is not going to take us where we need to go."

In truth, there is not a lot of daylight between the policy positions of the two parties - in part because the Liberals have adopted, practically word for word, some of their key planks from the New Democrats.

In their gut, Mr. Layton said, Canadians will be asking themselves "who are you going to trust on these things?"

But, despite a campaign that has been free of gaffes, the New Democrats just can't seem to gain traction.

The Nanos poll suggests they are trailing the Liberals in every part of the country. Most crucially, they're behind in provinces like Ontario, where elections are won and lost, but also here in British Columbia where they have a strong base of support and are traditionally competitive with both of the other major federal parties.

Another survey by Nanos shows that Mr. Layton, the politician Canadians say they would most like to have a beer with or let babysit their children, is losing ground to Mr. Ignatieff on the leadership score that measures trust, competence and vision.

Mr. Layton has what poker players call a tell. When he gets agitated, he reaches into his pants pocket and jingles his change. The change has been jingling a lot lately - especially when reporters ask about party fortunes.

But all is not lost for the NDP, not yet. There are still the leaders debates and Mr. Layton, a veteran of the political sparring matches, has those televised opportunities to make his case to the public.

"My hope in the debates is that we will be able to lay our platform out very clearly," he said, "and then people will be able to see that Ottawa is broken, we've got to fix it, and they will be asking themselves 'who do you trust to get that job done?'"

Mr. Layton appears to have the energy needed to mount an aggressive campaign over the remaining three weeks.

The crowds at campaign stops, while not matching those turning out to see the Liberal Leader, have been respectable - 400 people in London, Ont., the same number in Winnipeg and Halifax. The true NDP believers have not abandoned him.

And Mr. Layton still does not mention Mr. Ignatieff much in his speeches. Stephen Harper remains target No. 1.

But that change in his pocket is jingling.

Where the leaders are on Day 15
April 9, 2011
In the messiness of democracy, polling offers semblance of order
April 8, 2011 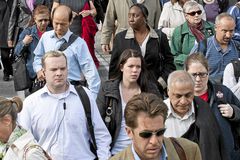 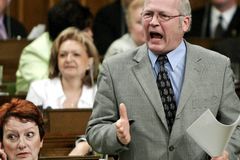