If Justin Trudeau had underwhelmed in the debate, his Thursday morning photo-op sparring at a Toronto boxing gym would have looked ridiculous in retrospect. As it turned out, it at least fit into a day in which the Liberal Leader seemed to fight his way back into a campaign where he was at risk of being marginalized.

By being the most aggressive person on the stage, and generally (outside of a spacey closing statement) presenting himself confidently and competently, Mr. Trudeau should if nothing else have re-energized supporters unnerved by the Liberals' slide in the polls and their Leader's struggle to counter Conservative attacks. And he may have given target voters who had drifted away cause to take him seriously again.

The challenge will be to build off that during the dog days of August, when interest in the early stages of the campaign is likely to wane. The Liberals can be expected to put him in front of lots of high-energy crowds, which plays to his skill as a retail politician, and have launched a new wave of television ads. But the Conservatives might continue to overwhelm them with negative ones, particularly if Mr. Trudeau shows signs of an upswing.

Can Mulcair find the right balance?

The transformation of Thomas Mulcair, over the course of this year, has been something to behold. At the advice of strategists brought in to help him turn around grim poll numbers and introduce himself to an electorate that was largely ignoring him, he has gone from Angry Tom to Smiling Tom, a comparatively warm and personable presence.

In Thursday's debate, though, his attempts at being calm and reassuring seemed to have gone a little overboard. Particularly in the opening segment on the economy, Mr. Mulcair was almost placid.

While saying they were happy with his overall performance, even some New Democrats privately acknowledge Mr. Mulcair might need to act a little hungrier to present himself as Stephen Harper's main challenger. The trick will be doing that without reverting too much to old form.

As in past debates, the Conservative Leader withstood attacks from three rivals at once without getting goaded into things he would regret (unless one counts seemingly admitting that the economy is in recession). That's a testament to Mr. Harper's ability to keep his cool.

While the other leaders landed some decent lines, none of them seemed to settle on an angle of attack that would really pay off. Mr. Harper even coasted through a segment on democratic institutions that seemed tailor-made for opposition politicians; even when they stopped squabbling among themselves, Mr. Mulcair and Mr. Trudeau (along with Elizabeth May) failed to make a compelling case about how the Conservative record on the Senate or other controversies have affected Canadians' lives.

One way or another, the other parties will step up their efforts to convince soft Conservative supporters that, after nearly a decade in power, Mr. Harper has lost touch with people like them.

Can May get more attention?

Elizabeth May made the most of a rare opportunity in the spotlight. Armed with a seemingly encyclopedic knowledge of other parties' records, the Green Party Leader was particularly effective fact-checking her rivals. And at least until she tried to make her case for pacifism during the final segment on international affairs, she didn't seem much further from the mainstream than anyone else.

Her problem is that, not competing for power and unlikely to be included alongside the other leaders in future debates, it's going to be hard for her to stay in the mix.

To most of the country, she may be about to disappear for the next couple of months. Her efforts to play off her debate performance will be limited largely to British Columbia, where she holds a seat and where the Greens could conceivably compete for one or two more, while causing vote-splitting headaches for the NDP.

How many more debates will there be?

Until recently, it appeared likely there would be at least two more English-language debates featuring Mr. Harper, Mr. Mulcair and Mr. Trudeau (one on the economy hosted by The Globe and Mail, and another on foreign policy hosted by the Munk Centre), and at least one in French with those leaders and the Bloc Québécois's Gilles Duceppe hosted by TVA. All the leaders other than Mr. Harper also seemed willing to participate in the traditional debates hosted by a consortium of broadcasters, as well as a debate on women's issues.

But matters have gotten more confusing, courtesy of Mr. Mulcair. He now says he won't appear in any debates that don't feature Mr. Harper, which could be a death blow to the consortium ones. He is also demanding an equal number of English and French debates, which would mean that if no additional French ones are scheduled he would be ruling himself out for any future English debates.

It is difficult to imagine that, jockeying to position himself as the main alternative to Mr. Harper, Mr. Mulcair would allow Mr. Trudeau to debate the Conservative Leader alone. We should have a better sense of what he's up to on Monday, when the NDP says it will release a list of debates in which he will participate. Whatever the case, no further debates are scheduled before September, leaving a good while for ads and stump speeches to carry the narrative. 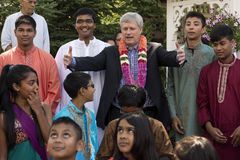 Mulcair ‘thrilled’ with first debate, lays out conditions for future ones
May 15, 2018 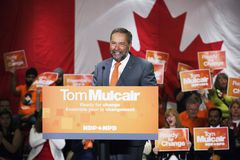 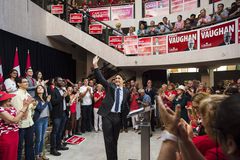