Charlie Angus is the New Democratic Party's everyman who promises a break from the ways of Tom Mulcair.

That's the message he is selling to New Democrats who are now casting their first ballots in the long leadership campaign after the NDP's dispiriting losses in the 2015 election.

"Tom did an amazing job in the House," Mr. Angus said in an interview. "But the party had really centralized how it approached things, its message, its fundraising. Everything was very professional. But, more and more, the grassroots were seen as people to hit up for donations."

The 54-year-old MP from Northern Ontario came out of the blocks of the leadership race as the front-runner. He was a political veteran, a star performer in Question Period and the man his fellow New Democrats elected as caucus chair in January, 2016.

Now he is in a tough fight with Jagmeet Singh, an Ontario MPP who has outflanked him in fundraising, claims to have sold far more party memberships and has more support among New Democrat MPs.

Mr. Angus is also feeling the heat of a late-race surge from Quebec MP Guy Caron, who, like Mr. Singh and fellow contender Niki Ashton, has racked up more caucus endorsements. So far, just two New Democrat MPs, both from ridings near his, have fallen in behind Mr. Angus.

He responds by saying he has the endorsements that matter – those of key party organizers at the local level who can get out the vote. "They are all with me."

He attributes the lack of support among New Democrat MPs to the amount of time he has spent asking about the problems in the party that need to be fixed. That effort, he says, has "ruffled some feathers" and made some members of his caucus uncomfortable.

Despite the minimal caucus support, high-ranking NDP officials say Mr. Angus remains one of the top two contenders to lead a party that has much rebuilding to do in the two years before the next federal election.

Mr. Angus was born in Timmins in Northern Ontario and grew up in Scarborough in east Toronto.

He is an activist whose passion for social justice has been heavily influenced by the social-justice pioneers who shared his Catholic religion. He is the author of seven books, the last two of which recount fights for fairness. And he is a guitarist who plays with a group called the Grievous Angels.

Andrew Cash, a fellow musician and a former NDP MP who was defeated in the last election, has been a good friend of Mr. Angus since they were 15 years old. They formed a band called L'Étranger and wrote music about social causes that was inspired by the punk-rock militancy of the Clash.

"We shared the idea that your life should have some sense of purpose and that purpose should be something broader than just enriching yourself," Mr. Cash says. "He wrote a song about the leak at Three Mile Island [nuclear plant in Pennsylvania] and it just incensed him, that that kind of corporate laissez faire mentality would lead to putting people's lives in danger. It just blew his mind that that could happen."

When he was in his early 20s, Mr. Angus and his wife, Brit Griffin, rented a house in Toronto and opened their doors to homeless men.

In 1990, the family moved to Cobalt in Northern Ontario. Mr. Angus says he wanted to live in a place where he could fight for social issues. That included opposition to dumping Toronto's garbage in the abandoned Adams Mine south of Kirkland Lake, and especially his advocacy on behalf of Indigenous people.

Mr. Angus became known to the NDP through his social activism, and former party leader Jack Layton persuaded him to run for a federal seat.

In 2004, he was elected as the MP for Timmins-James Bay, geographically one of the largest ridings in the country and a place where the First Nations are among the most disadvantaged.

Mr. Angus has spent his years in Parliament lobbying for their welfare. And he has been the NDP's voice against government wrong-doing as the party's ethics critic.

Bill Tieleman, an NDP strategist and columnist, is also among Mr. Angus's supporters. "Canadians don't need to have a celebrity as a Prime Minister, they need somebody who will actually stand up and get the job done," he says.

For his part, Mr. Angus says his campaign strategy has been to persuade New Democrats he wants to hear what they have to say, that their concerns are his concerns.

"If we're going to offer real positive and credible change," Mr. Angus says, "then we need a leader who's going to get in there and do some heavy lifting. Because of my experience in Parliament, but also as a community organizer over the years, I feel it is time that I stepped up and offered to take on that role." 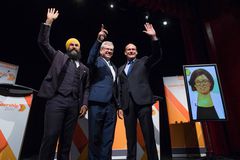