A move to depose NDP Leader Tom Mulcair by leftist elements in the party is escalating ahead of a leadership vote at a party convention next month.

Sid Ryan, a former president of the Ontario Federation of Labour, and the NDP's socialist caucus are pushing party members for a review of Mr. Mulcair's leadership after a federal election that saw the NDP drop from 95 seats in the House to 44. The party is also smarting from the loss of Official Opposition status that had been won by former leader Jack Layton in 2011.

Mr. Ryan, a candidate for the New Democratic Party in three provincial and two federal campaigns, told The Globe and Mail on Tuesday that he feels Mr. Mulcair is not the person the party needs as leader "because he's got such an overbearing personality and the party is desperately in need of renewal."

"Is there a tremendous amount of angst out there about the result of the election and how the election was run? No question about it, there is," he said.

Party members meet in Edmonton in the first week of April to begin preparations for the next federal election in 2019. They will be asked whether they believe they should hold a new contest for leader.

Barry Weisleder, the chair of the NDP socialist caucus, said he and some of his colleagues will be in Toronto next week to talk about their campaign for a leadership review.

"The election campaign waged by Thomas Mulcair and his brain trust last summer and early fall was an unmitigated disaster," Mr. Weisleder said. "It portrayed the NDP as fiscally conservative and it was not mandated by any decision of an NDP convention or federal council to wage such a campaign."

The popularity of Bernie Sanders, who is running for the Democratic nomination in the United States, and Jeremy Corbyn, the Leader of the Labour party in Britain, has proved that left-wing platforms are not "the kiss of death," Mr. Ryan said.

But Mr. Mulcair and Mr. Layton both weeded socialist messaging from their campaigns in an effort to broaden the party's appeal.Mr. Mulcair, a former provincial Liberal in Quebec, promised to balance the budget despite a weakened economy, a move criticized by many long-time New Democrats as being at odds with the party's core values. The NDP Leader said often during the election campaign that keeping the books in the black is central to his own nature.

"I don't think Tom can go from where he is now to being a Bernie Sanders in the next election," Mr. Ryan said. "Tom should bite the bullet on this one, step aside and allow some other person to come in that's going to bring the kind of zest and zeal that we need in this party."

Party president Rebecca Blaikie has conducted a postelection analysis that, according to her interim report, blames the NDP loss on lapses in campaign preparation and execution as well as the decision to promise the balanced budget.

"Something is wrong with the messaging of the NDP," Mr. Ryan said. "Something is seriously wrong with the policies that we're putting before people. They're not buying in to what we are offering. So I don't know if this kind of renewal can take place with Tom at the helm."

Mr. Mulcair's caucus members have, so far, stood by their Leader despite watching some prominent and well-liked colleagues go down to defeat in October – mostly to the Liberals.

But Mr. Ryan's criticism of Mr. Mulcair comes after Cheri DiNovo, a Toronto member of Ontario's provincial legislature, said Mr. Mulcair has "got to go," and after Alain Charbonneau, the president of the Lasalle-Ville-Émard-Verdun riding association, said Mr. Mulcair's one mission was to win the election and "he failed."

Mr. Mulcair has said he takes responsibility for the shortcomings of the campaign and that he is determined not to repeat the mistakes.

When asked Wednesday about the criticism being levelled by his detractors, the NDP Leader said he is actually heartened by what he is hearing from his members as he travels the country in advance of the April meeting.

"I am not going to take anything for granted," he said. "I am going to continue to work tirelessly as I have always done. But people are showing more and more confidence in the way things are going, even though they had a lot of disappointment with the results of the election."

The interim report of Ms. Blaikie's election postmortem does not indicate any solutions for the problems that have been identified, said Mr. Weisleder.

"There are many many shortcomings with respect to foreign and domestic policies," he said. "That's why we are seeking a leadership review. Let's put all of the issues on the table and let the members decide."

Editor's note: an earlier version of this story said the chair of the NDP socialist caucus and some of his colleagues will be meeting in Ottawa next week. In fact, they are meeting in Toronto. This version has been corrected.

Gerald Caplan: I endorsed Mulcair for NDP leader, but I have little enthusiasm left
February 16, 2016

How does the NDP begin its climb back to relevance?
February 29, 2016

Mulcair said to need support of 70 per cent to remain NDP leader
February 12, 2016 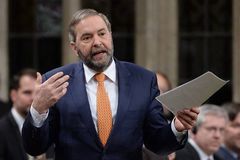