Less than half the almost 300,000 people who signed up to take part in the federal Liberal leadership race have registered to vote, despite getting an extra week in which to do so.

As of late Thursday, shortly before the midnight deadline, almost 43 per cent of supporters and members — some 126,000 — had registered.

The party had originally set a deadline of Mar. 14 but acquiesced to a request by frontrunner Justin Trudeau's camp to extend the registration period by one week, over the objections of several rival camps.

The Trudeau team argued the extra time was needed because the party was having trouble getting registration packages to more than 100,000 people, mainly Trudeau supporters, who signed up without providing email addresses.

However, the extension produced only about 21,000 additional registered voters. That's despite a controversial move by the party over the weekend to call those who hadn't registered and give them the chance to do so on the spot, sparking accusations that party brass were showing favouritism toward the frontrunner.

Hundreds of those who have registered may yet be disqualified. The list of registered voters is to be finalized by the party by midnight Sunday and all leadership camps will then have until midnight Tuesday to mount challenges against those they believe may be invalid.

Various camps say there are numerous suspect registrants, including a number of instances in which dozens of people — in one case more than 100 — have provided the same email address or home address.

The Liberals had hoped to significantly broaden the once-mighty party's base by allowing for the first time a new class of supporters, not just dues-paying, card-carrying members, to vote for the next leader.

But while the recruitment of 294,000 supporters and members was encouraging, the fact that almost 60 per cent failed to take the next step and register leaves the party with fewer eligible voters than the NDP had for its leadership contest last year.

New Democrats, who allowed only members to vote, boasted a record 131,000 eligible voters. Ultimately, just less than half of them cast ballots.

Liberal insiders fully expect a large chunk of their eligible voters will similarly fail to cast ballots, which will be done online or by phone during the week of April 6.

Still, Trudeau maintained the supporter experiment has been a big success.

"We have a brand new experiment in democracy that the Liberal party has been trying." he said Thursday after commenting on the latest federal budget.

"We got almost 300,000 people to indicate their interest and to engage. The fact that we're getting close to 50 per cent in terms of people who are going to actually vote I think is a very good thing. We're going to have an excellent voting week, I know that."

Trudeau's team initially boasted that it had signed up 165,000 supporters, which was widely interpreted as assuring the front-runner a comfortable first-ballot victory.

However, the disappointing number who registered to vote may mean a closer contest than expected.

The outcome is impossible to predict with any accuracy because much will depend on the geographic distribution of each candidate's support and each camp's ability to persuade their supporters to actually cast ballots.

Because the results will be weighted to give each riding equal clout, a riding with 5,000 voters will have no more influence on the outcome than a riding with 50 voters.

Vancouver MP Joyce Murray got a late burst of momentum from online and grassroots advocacy groups who encouraged their members to sign up as Liberal supporters to back electoral co-operation among progressive parties in a bid to defeat Stephen Harper's Conservatives. As the only candidate promoting electoral co-operation, Murray stood to benefit most from the advocacy groups' efforts.

One of those groups, Leadnow.ca, said 21,000 of its members used the group's pro-co-operation website to link to the Liberal supporter sign-up site.

Leadnow.ca's Jamie Biggar acknowledged not all of those will have registered to vote but he predicted they're more committed than average to influencing the outcome of the race.

"We're hearing anecdotally from people that they are very excited about this campaign and the opportunity it affords to show that Canadians will get involved and vote for co-operation," he said.

Only six candidates remain in the contest after a third contender, Ottawa lawyer David Bertschi, withdrew Thursday, following Montreal MP Marc Garneau and Toronto lawyer George Takach out the exit door. While Garneau and Takach have thrown their support to Trudeau, Bertschi did not endorse anyone. 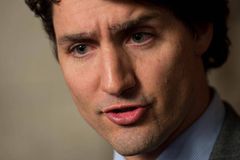 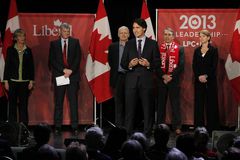 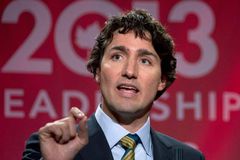 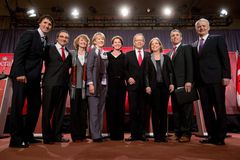 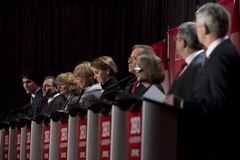