As his health significantly deteriorated this month, Liberal MP Arnold Chan wanted to talk about politics.

When his colleague, David Graham, visited him at his Toronto home last Monday, Mr. Chan asked about the forthcoming work of the procedure and house affairs committee. "He felt guilty that he wasn't going to come back to the House this week," said Mr. Graham, a Liberal MP from Quebec.

Two days ago, fellow Scarborough MP John McKay described by phone to Mr. Chan's wife, Jean Yip, the drama surrounding the government's proposed tax reform that unfolded at the Liberal caucus retreat in Kelowna, B.C. Mr. Chan, who had by then lost the ability to speak, listened in, measuring his approval or displeasure with thumbs up or thumbs down gestures.

And in recent weeks, Mr. Chan relayed to his long-time friend, Ontario MP Mark Holland, a speech he was hoping to give in the House of Commons this fall about the dangers of using overheated rhetoric, building on the previous plea for civility he'd delivered in June.

"He wasn't afraid of talk about his end, about death," said Toronto MP Rob Oliphant, a United Church minister who has been helping the Chan family throughout the summer. "But he preferred to talk about his constituents and politics and the party and government and Parliament."

On Thursday, Mr. Chan, 50, died at home after battling nasopharyngeal carcinoma, a head-and-neck cancer, on and off for more than 2 1/2 years. Along with his wife, Ms. Yip, Mr. Chan leaves three teenage sons, Nathaniel, Ethan and Theodore.

He will be remembered, in part, for the impassioned and emotional plea for civility he delivered in the Commons in June. Speaking only from rough notes, Mr. Chan urged his colleagues to ditch the "canned talking points" and treat the institution – and each other – more honourably. He advised his fellow MPs, "We should use our heads, but follow our hearts."

"We will miss him dearly," she said.

"For 3 1/2 years, he distinguished himself as a thoughtful, kind and – above all – tireless advocate for Canadians. He believed deeply in our democracy and became one of its most faithful and eloquent guardians," Mr. Trudeau said in a statement.

"Arnold accomplished all of this despite battling cancer throughout most of his time as an MP. Even at his sickest, he found the strength to stand up in the House of Commons and represent his constituents, who he cared about so deeply."

A long-time Liberal, Mr. Chan worked as a staffer at Queen's Park before being elected to the Scarborough-Agincourt riding in a by-election in June, 2014. He was first diagnosed with cancer in January, 2015, and after taking a six-month leave of absence, he was given the all-clear and ran successfully for re-election in October, 2015. In February, 2016, he discovered his cancer had returned, but continued to work on Parliament Hill.

Colleagues – including Conservatives and New Democrats – remembered Mr. Chan, who also served as deputy house leader, as a fiercely intelligent, driven and dedicated parliamentarian, who genuinely believed in public service and pushed his fellow MPs from all political stripes to do better.

NDP MP David Christopherson sat with Mr. Chan on the procedure and house affairs committee, which became heated this spring after the Liberal government tried to change the rules of the Commons. Mr. Christopherson recalled their interactions on the sidelines of meetings, where Mr. Chan always attempted to mediate solutions that would work for everyone.

"He was wonderful to work with," Mr. Christopherson said. "He had no interest in games. He wanted to focus on the matter at hand, and he wanted to do it in a non-partisan way."

Conservative MP Blake Richards, who also sits on the committee, said he was inspired by Mr. Chan's determination to attend meetings, even as he visibly struggled with his illness.

"You knew that that was very difficult on his health, and he was suffering," Mr. Richards said. "It was never about him, right? He just did what he had to do. And it was such a great example for all of us."

Mr. Chan's funeral is expected in the next 10 days, with Mr. Oliphant to help conduct the service. On Monday, all parties are expected to deliver tributes to Mr. Chan in the House of Commons – a fitting spot, Mr. Oliphant said, for a man who so revered it.

"He reminded every MP all the time about the nobility of being an MP and about the importance of the House," Mr. Oliphant said. 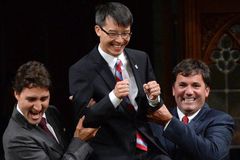