Foreign Affairs Minister Stéphane Dion said the Liberal government remains committed to a contract to sell $15-billion in weaponized armored vehicles to Saudi Arabia even in the face of a new UN report documenting human-rights violations by a Saudi-led bombing campaign in Yemen.

In a report obtained by The Guardian, a United Nations panel investigating the bombing campaign in Yemen has found "widespread and systematic" attacks on civilian targets in violation of international humanitarian law – revelations that are prompting the Official Opposition in Westminster to urge an immediate inquiry and suspension of British arms sales to Saudi Arabia.

Mr. Dion said the Liberal policy on the sale of weaponized armoured vehicles remains unchanged. Ottawa brokered this deal and is the prime contractor to supply Saudi Arabia's national guard.

"We respect the contract," he told reporters Thursday morning after a speech in Ottawa.

He said his main concern is the letter of the law under Canada's export control regime. Federal arms export controls stipulate that when Canada is selling weapons to a country with a poor human-rights record, it must first assure itself that these arms would not be used against civilians.

"For the export permits, the minister of foreign affairs will look at if these [light armored vehicles] are well used," the cabinet minister said.

Mr. Dion appears to be saying that if there's no risk the Saudis will use the combat vehicles in Yemen, then the findings of Riyadh's conduct there are of no interest to him.

But Canada's export control regime imposes other obligations as well. It also requires Ottawa to regulate the flow of arms to countries "that are involved in, or under imminent threat of hostilities." The Saudis have been leading an intervention in Yemen for nearly one year. Canada is also obliged to ensure that military exports "are not prejudicial to peace, security or stability in any region of the world or within any country."

The Liberals shifted their message on Saudi Arabia recently after weeks of characterizing the Saudi transaction as a done deal that was out of their hands. Last week, Mr. Dion's office announced that while the Liberals had no intention of cancelling the deal, they would not ignore developments in Saudi Arabia and would "factor this information into consideration of future permits." Permits for exports would need to be renewed over the life of Canada's 14-year arms deal with Riyadh.

Mr. Dion on Thursday disputed the idea the Liberals have altered their policy at all.

He left a scrum of reporters after only several questions.

The UN report has raised fresh hopes among critics of arms sales to Saudi Arabia that Western governments might finally be persuaded to suspend the sale of weaponized armoured vehicles to a country that already has an abysmal record on human rights.

According to The Guardian, the new UN report attributes 60 per cent of – or 2,682 – civilian deaths and injuries in Yemen to airlaunched explosive weapons dropped by the Saudi-led coalition: "The coalition's targeting of civilians through air strikes, either by bombing residential neighbourhoods or by treating the entire cities of Sa'dah and Maran as military targets, is a grave violation of the principles of distinction, proportionality and precaution."

Last year, the Saudis and Arab allies launched a military intervention in Yemen in support of President Abd-Rabbu Mansour Hadi, who was under threat from Houthi forces aligned with Iran.

The Trudeau government has faced repeated requests to justify the shipment of weapons to Saudi Arabia, a country notorious for its atrocious treatment of women, dissidents and prisoners. The Liberals promised during the election campaign that they would revise Ottawa's approach to international relations to improve this country's reputation on the global stage, and marketed this change as "Canada's back." 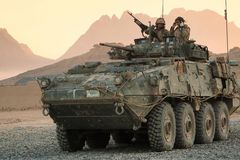