The Liberal Party tried to woo disaffected Conservatives at a four-day policy convention in Montreal, seeking to solve the economic anxieties of Canadians with a middle-of-the-road approach to federal spending and a strong slate of business voices in Leader Justin Trudeau's team.

On the last day of the gathering, the Liberal Party asserted itself as the "party of choice," voting in favour of the decriminalization of medically assisted suicide. The Liberal policy on this thorny matter provides a contrast with the position of the Conservative Party, which rejected the legalization of assisted suicide at its own convention last fall.

The overall plan at the four-day Liberal gathering was to attract centre-right voters, while coming out as a progressive voice on issues such as the right-to-die and the legalization of marijuana. Liberals also approved a process to formally remove the special status attributed to senators in the party's constitution by a vote of 525 to 32, confirming Mr. Trudeau's decision to kick them out of his caucus last month.

Mr. Trudeau refused to speak to the media on Sunday, leaving a number of unanswered questions about his economic plan. He said in his keynote speech on the previous day that he will not raise taxes on the middle-class, but has yet to spell out what that entails for other Canadians. The party has also taken expensive commitments in relation to infrastructure spending, daycare and aboriginal issues, without costing them out.

The Liberal Party is under pressure to define its policies to fuel long-term economic growth in the country, and to state exactly how it wants to use the federal government's "wiggle room" to improve the lot of the middle-class.

In his main speech to the convention, Mr. Trudeau offered a pledge to ensure that all Canadians have a "fair shot at success," stealing a page from his father, Pierre Trudeau's, 1968 call for a "just society."

The clearest message from Justin Trudeau and other Liberals at the convention was a direct appeal to past Conservative voters who might be casting "a weary eye" on the Harper government.

"People in Ottawa talk about the 'Conservative base' as if it's an angry mob to be feared. They're wrong," Mr. Trudeau told the 3,000 delegates. "Canadians who voted Conservative aren't your enemies, they're your neighbours."

Speaking on Friday, retired lieutenant-general Andrew Leslie attacked the Conservatives on their treatment of veterans and on military procurement, trying to weaken support for the Harper government among some of its core constituencies.

"If you don't like what's going on, then join us," said Mr. Leslie, who will likely run in Ottawa-Orléans in the next election.

The Liberals used the convention to showcase two potential candidates with strong economic credentials: businessman Bill Morneau (expected to run in Toronto) and Jim Carr (seeking a nomination in Winnipeg).

Mr. Morneau, who runs a business that manages employee benefits and pension plans, said there is an "epidemic of worry" among middle-class Canadians, accusing the Harper government of watching from the sidelines.

"How does the Conservative government respond? By boasting that it is balancing the budget, while middle-class Canadians struggle to balance their chequebooks," Mr. Morneau said.

Also on the Liberal Party's wish list for candidates is Jody Wilson-Raybould, regional chief of the B.C. Assembly of First Nations, who was front and centre during the convention as one of the three co-chairs. She is expected to run in the province in the next federal election.

The Liberal Party will hold open nominations in all ridings, and Mr. Trudeau will not appoint any candidates. However, the convention made it clear that some candidacies are being favoured, with the Liberal leader attending specific speeches and giving a hearty hugs and handshakes on the stage.

"Justin has been very clear he does not want to appoint," says Navdeep Bains, a former Ontario MP who is co-chair of the Ontario campaign. "That doesn't mean he doesn't have preferences. He is looking for skill sets … he is attracting good candidates."

One of the most divisive debates at the Liberal convention involved the resolution to decriminalize medically-assisted suicide. Supporters of the motion carried the day, with one delegate telling the convention that the issue was "a matter of choice, and we are the party of choice."

Still, there was opposition among Liberals, with one opponent of the resolution stating that the priority was "not speedier death," but rather improving palliative care to ensure "a truly caring death."

The Conservatives attacked the Liberal plans for Canada as requiring tax hikes, while the NDP said that the Liberals cannot be trusted to enact their agenda if they come back to power. 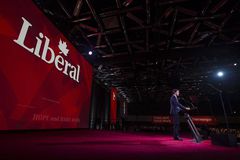 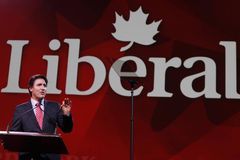 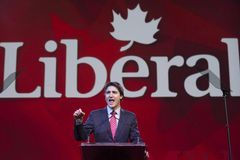 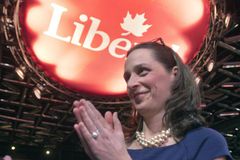 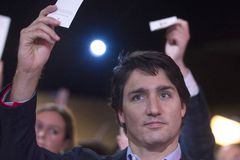 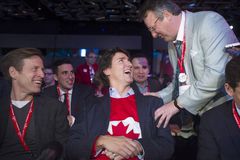