A Chinese property developer in British Columbia who has donated to the Liberal Party of Canada, but has turned up on a list of suspected fugitives wanted by the Chinese government, never had an official role within the party, the Liberals said in a statement.

The party distanced itself from Michael Ching Mo Yeung Wednesday, clarifying that fundraising events attended by the Vancouver-based developer, and organized in part by his daughter, were all done according to Elections Canada rules.

"Mr. Ching has donated to the Liberal Party of Canada, as well as the Conservative Party, and has attended a few Liberal events," party spokesman Olivier Duchesneau said in the statement. He added that they "are confident that all Elections Canada rules were always respected."

Mr. Ching built a condo building and other projects in Vancouver and donated thousands of dollars to the Liberal Party of Canada as well as to Justin Trudeau's leadership campaign, but later turned up on a list of 100 people suspected of corruption, under the name Cheng Muyang. Mr. Ching, through lawyers, has denied the charges, maintaining that confessions implicating him of embezzlement in China were made under torture. Mr. Ching said he faces the risk of torture if he is returned to China and is being represented in refugee hearings by well-known human-rights lawyer David Matas. Mr. Ching did not respond Wednesday to a request for comment made through his lawyer.

The Liberal statement on Mr. Ching comes after the South China Morning Post published photos this week showing Mr. Ching – as well as his daughter, Linda Ching, who was previously president of the British Columbia wing of the Young Liberals of Canada – at events with Mr. Trudeau two years ago in Vancouver, as well as with former federal Liberal cabinet minister Raymond Chan.

When stories first surfaced that Mr. Ching – who also donated to municipal politicians in Richmond, B.C. – was wanted in China on corruption charges in April, photos soon emerged of the developer at events with former Liberal leader Michael Ignatieff.

Mr. Ching's father is a former governor of China's Hebei province, but was expelled from the Communist Party on corruption charges in 2003. When Mr. Ching's links to the Liberal Party first arose months ago, the Liberals said it would look into the donations.

The new photos show Mr. Ching standing next to Mr. Trudeau at a $120-a-plate fundraising dinner in 2013 that was emceed by Ms. Ching, as well as sitting with Mr. Chan at a federal Liberal convention. Mr. Ching has personally made less than $10,000 in donations to the federal Liberals over the past decade, but the report also said Mr. Ching's daughter launched a support group for Mr. Trudeau called the "Tru-Youths" – who wore red vests at events and signed up more than 1,000 leadership supporters for Mr. Trudeau – and were registered as a charity based out of Mr. Ching's office.

"All contributions made to the Liberal Party of Canada by individuals attending these events were made, processed and reported in accordance with the Canada Elections Act," Mr. Duchesneau said.

Federal candidates neglect China at their own peril
September 30, 2015 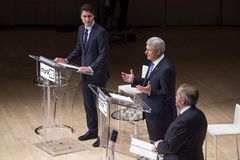 Liberal candidate in B.C. resigns over contentious Facebook posts
September 30, 2015
Follow Iain Marlow and Ian Bailey on Twitter @iainmarlow @ianabailey
Report an error Editorial code of conduct
Due to technical reasons, we have temporarily removed commenting from our articles. We hope to have this fixed soon. Thank you for your patience. If you are looking to give feedback on our new site, please send it along to feedback@globeandmail.com. If you want to write a letter to the editor, please forward to letters@globeandmail.com.
Comments are closed