The Trudeau government is extending a Canadian Armed Forces deployment in war-ravaged Ukraine by two years, a move that Moscow decried as a counterproductive "military venture" it predicted will hinder chances for peace.

The renewed training mission comes as the war in eastern Ukraine between Kiev and Russian-backed separatists has escalated, killing more soldiers and civilians and leaving ceasefire agreements in tatters.

Ottawa's decision to prolong the commitment – which will remain at 200 troops – comes even though the Liberals have spoken about rebooting the relationship with Moscow after years of frosty ties under former prime minister Stephen Harper.

Foreign Affairs Minister Chrystia Freeland, who announced the extension on Monday with Defence Minister Harjit Sajjan, is a strong advocate of Ukrainian independence, and recently became the apparent target of a disinformation campaign by Russia, including allegations on pro-Moscow websites that her maternal Ukrainian grandfather was a Nazi collaborator.

It has been nearly three years since Moscow annexed Ukraine's Crimean peninsula despite widespread condemnation by Western powers. Asked what message Canada is sending Russia by extending the military mission, Mr. Sajjan replied, simply: "We stand by Ukraine." The Defence Minister noted Canada is also preparing to send 450 troops to Latvia as part of a NATO mission to counter Russian expansionism in the region. "We are sending a very strong message of deterrence," Mr. Sajjan said.

The mission to Ukraine, begun in 2015 under Mr. Harper's government, was slated to end on March 31, but will now run until the same date in 2019.

This means Canadian soldiers will continue training Ukrainian counterparts on techniques they can use in the bloody fight with pro-Moscow forces, a conflict that has killed more than 9,800 people since 2014. The mission has included bomb disposal, military policing, and medical and logistical training, and in the future will include "reform of Ukraine's defence establishment."

More than a million Canadians have ethnic roots in Ukraine, including Ms. Freeland, who warned on Monday that Canada should expect to be the focus of Russian disinformation campaigns similar to what is happening in Europe and the United States.

Russia showed its displeasure at Ms. Freeland's promotion to Foreign Affairs Minister by maintaining a travel ban against her. Recently, stories on pro-Putin regime websites have called her "Canada's fiercely anti-Russian Foreign Affairs Minister" and alleged that her grandfather, Michael Chomiak, was a Nazi propagandist in Poland.

"I don't think it's a secret," Ms. Freeland told reporters when asked about the articles. "American officials have publicly said, and even [German Chancellor] Angela Merkel has publicly said, that there were efforts on the Russian side to destabilize Western democracies, and I think it shouldn't come as a surprise if these same efforts were used against Canada. I think that Canadians and indeed other Western countries should be prepared for similar efforts to be directed at them."

Ms. Freeland, a former financial journalist, has been a tough critic of Russia's annexation of Crimea. She was blacklisted in 2014 along with 12 other Canadians for advocating Western sanctions against Russia.

Her office denied the minister's grandfather was a Nazi collaborator. Ms. Freeland has written that her maternal grandparents fled Ukraine in 1939, calling them "political exiles with a responsibility to keep alive the idea of an independent Ukraine." Mr. Chomiak was a journalist in Poland and immigrated to Canada after the Second World War.

A spokesman for the Russian embassy in Ottawa, Kirill Kalinin, said the Putin government had nothing to do with stories about Ms. Freeland's grandfather. However, he noted the minister did not respond directly to the allegations at the news conference to announce the extension of the military training mission.

Mr. Kalinin said the extension will not help both sides in the Ukraine war talk to each other. Moscow would rather other countries urge Kiev to negotiate with separatist rebels in eastern Ukraine.

"Canada should exert pressure on the authorities in Kiev to implement their obligations under the Minsk accords and concentrate on reaching a peaceful solution instead of pursuing military ventures," Mr. Kalinin said in a statement. "[The] Canadian government's decision to extend the military mission in Ukraine is counterproductive."

Ukrainian Canadian Congress president Paul Grod applauded the move, calling it a significant gesture of support for Kiev at a time when the fighting in eastern Ukraine has mounted.

He alleged Russia had pressed the Trudeau government not to prolong the mission.

"There was a lot of pressure being put on by the Russian embassy not to do this," Mr. Grod said.

The Ukrainian-Canadian leader said the show of solidarity from Western countries towards Ukraine is a rebuke to Russia.

"Why do the Russians care? It's the symbolism that Canada and the United States and Great Britain and some European companies have physical military presence in Ukraine, which Russia views as its sphere of influence, and that's why it's so offensive to Moscow," he said.

"We do not comment on diplomatic communications between the Embassy and the Foreign Ministry of the host country," he said, adding that Moscow believes Canada's foreign policy is a sovereign decision.

"It's up to the Canadian government and people of Canada to determine whether and to what extent military involvement abroad serves national interests," he said.

"However, we have always made public our negative attitude to the extension of the military mission in Ukraine, as well as recent NATO deployment at Russia's doorstep, which are counterproductive and deplorable, disruptive to political settlement between warring parties of the Ukrainian civil war and European security." 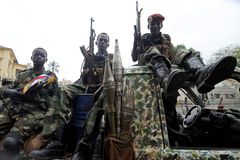