Kathleen Wynne said she would consider dropping her push for a provincial pension plan if Justin Trudeau wins the federal election.

The Ontario Premier, campaigning aggressively for the federal party leader in the last week before the vote, said she would be open to abandoning the Ontario Retirement Pension Plan, which has been a political flashpoint between the Liberal Premier and Conservative Leader Stephen Harper even before he called the election in early August.

The Ontario government said the plan, which starts in 2017 with benefits to be paid out to workers beginning in 2022, would help 3.5 million Ontarians when they retire, but will be rolled out over several years. Contributions from employers and employees will also be phased in.

But if the Liberal Leader emerges as the winner on Oct. 19, the Premier said as she campaigned across the Greater Toronto Area on Tuesday that improving the existing Canada Pension Plan would address her concerns about people who lack a workplace pension plan having enough money to live on when they retire.

"If we have a partner in Justin Trudeau to sit down and work out what they're looking at as an enhancement to CPP, that was always my starting point, that was the solution," she said.

The Conservative Party has been critical of the plan, calling it a tax increase.

Ms. Wynne, who early on in the campaign appeared at a major rally with the Liberal Leader in Toronto, attacking both Conservative Leader Stephen Harper and the NDP's Tom Mulcair, was in four ridings in the GTA Tuesday – two of which are battles between the Liberals and NDP – University-Rosedale, where Liberal Chrystia Freeland is competing against Jennifer Hollett, and Spadina-Fort York, where Liberal Adam Vaughan is up against Olivia Chow. The other two ridings – Oakville North-Burlington and Etobicoke-Lakeshore, which former Liberal leader Michael Ignatieff lost in the 2011 election campaign, are fights between the Liberals and Tories.

Ms. Wynne has attracted controversy for her overtly partisan support of Mr. Trudeau, breaking with other premiers who are content to remain on the sidelines during the federal campaign.

The Ontario Premier, however, is expected to be in more ridings later this week; the legislature is not sitting. Her presence is angering some NDP strategists, who argue that if she wants to defeat Mr. Harper, as she has said she does, why isn't she campaigning against incumbent Tories in GTA ridings, rather than against New Democrats.

In addition, while Ms. Wynne is on her tour, Mr. Trudeau was in three NDP-held Toronto ridings Tuesday – Beaches-East York, Parkdale-High Park and Davenport. A senior Ontario Liberal official says the two leaders can cover more ground if they split up, as there are a lot of ridings in play that weren't just two weeks ago.

On Monday, the Liberals focused on Tory-held ridings, trying to appeal to disaffected former Progressive Conservatives.

On Tuesday, they switched to NDP-held ridings, pitching progressive voters that the Grits are the only ones offering immediate change.

The battleground for the 2015 election is in Ontario – and Ms. Wynne is not the only politician lending her star power to a federal campaign: Rob and Doug Ford made an appearance at a Harper event in Etobicoke Tuesday morning and Ontario NDP Leader Andrea Horwath campaigned in Brantford and Niagara Tuesday.

Mr. Mulcair was in Oshawa and Brampton.

Darrell Bricker, CEO of polling firm Ipsos Public Affairs, says Ms. Wynne's campaigning will only really help to rally the Liberal troops to get out the vote. "I don't think her coattails would be seen as that long," he said in an interview.

However, her electoral machine effectively got her supporters out during the 2014 provincial election, and swept the GTA. Mr. Bricker said her network is "worth plugging into."

"When somebody is a winner, you don't turn your nose up at their help," he said. 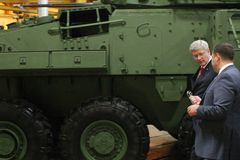 Trudeau says he would confront 'the bully that is Vladimir Putin'
May 15, 2018 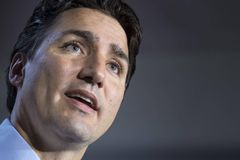 Tories ramp up ground game in effort to catch leading Liberals
May 15, 2018 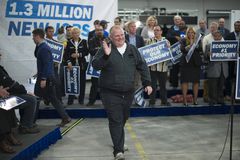 Liberals have been better bet than Tories for stock investors
May 15, 2018 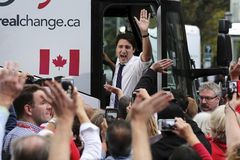 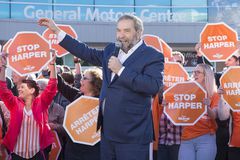