The Liberal government is pressing ahead with a controversial monument to victims of communism – but it will be redesigned and built farther west of Parliament Hill than originally planned.

Canadian Heritage Minister Mélanie Joly announced Thursday that the monument will instead be built at the Garden of the Provinces and Territories, which is a plot of green space on the south side of Wellington Street farther west than the original location.

"The process was too divisive, too political, and didn't generate the right consensus that ought to be generated when it comes to a monument," Ms. Joly said. "It's an important monument and ought to be celebrated. It ought to be commemorated. But at the same time, the process has to be an open, transparent and inclusive one and that's exactly why we're doing this right now."

The government will now hold consultations on a new design. The federal budget for the project has been reduced to $1.5-million, which will be matched by private donations, for a total budget of $3-million.

The previous Conservative government had promised $3-million in federal funds and expected the total cost to exceed $5-million. As a result, new proposals are expected to be considerably smaller than what has been proposed to date. The federal government has already spent $370,000 on the project, including a national design competition, which will now start over from scratch.

The site was one of the most controversial aspects of the project, according to critics, including Ottawa Mayor Jim Watson and Supreme Court Chief Justice Beverley McLachlin. The prime location on the north side of Wellington Street immediately southwest of the Supreme Court has long been planned for a new Federal Court building. The space is currently a grassy square bordered by trees and parking spaces.

Ms. Joly said Thursday that the Supreme Court and the Ottawa mayor were among the roughly 30 groups and individuals who were consulted by the Liberal government.

Ms. Joly said those consultations led the government to the view that there is consensus around the idea of building the monument at the Garden of the Provinces and Territories, which had been proposed earlier along in the process.

The monument is popular with groups representing Canadians who come from former communist states. The project was heavily steered and promoted by Jason Kenney, then the Conservatives' multiculturalism minister, who had long been tasked by the party to gain new support in Canada's ethnic communities.

Ludwik Klimkowski, board chair of Tribute to Liberty, the charity organization that is fundraising in support of the monument, was on hand for the minister's announcement and pledged his support.

Mr. Klimkowski noted that the full name for the project includes the phrase "Canada, a Land of Refuge," which he said should be uniting message in light of the country's current focus on accepting Syrian refugees.

"The fact that we need this unified, common place for all of us should elevate this memorial beyond any political discourse and I am really, really happy that Madam Joly is so open and so transparent that we were able to talk at length as to what needs to be accomplished," he said. "Tribute to Liberty has endorsed [the government's] idea."

Conservative MP Peter Van Loan, who is the critic for Canadian heritage and national historic sites, said he is disappointed to see the project will be delayed and that the Liberals are reducing the size of the financial pledge made under the Conservatives.

Nonetheless, he said his party continues to support the project.

"We want to see a memorial go ahead," he said.

Future plans for the land near the Supreme Court are now in the hands of Public Works.

Meanwhile, the Liberals have not yet decided on the fate of another controversial monument that is planned for Cape Breton, called Mother Canada.

The Vimy Foundation has strongly opposed the project as "disrespectful and unsavoury," as it copies the image of the statue at the Canadian National Vimy Memorial in France.

Environment Minister Catherine McKenna, who is responsible for Parks Canada, said Thursday she is still reviewing the file.

"We will be making a decision shortly," she said. "There's a diversity of views. There are certainly people that are concerned about the location in a national park and we've had many letters written in that regard. So we're just reviewing it now. There is a process under way. … I think we just need to look very carefully when we make decisions about memorials to ensure that there is public support for them." 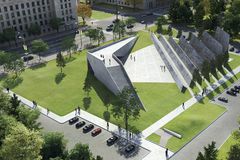 Two monumental errors that need to be fixed
December 10, 2015
Follow Bill Curry on Twitter @curryb
Report an error Editorial code of conduct
Due to technical reasons, we have temporarily removed commenting from our articles. We hope to have this fixed soon. Thank you for your patience. If you are looking to give feedback on our new site, please send it along to feedback@globeandmail.com. If you want to write a letter to the editor, please forward to letters@globeandmail.com.
Comments