Justin Trudeau is signalling that his government will make a clean break from the policies and practises of its Conservative predecessors with a relatively short Speech from the Throne that promises a cleaner environment, an enhanced social safety net, and a new era of openness and transparency.

A tax cut for middle-income families, money for infrastructure and a pledge to rebuild the relationship with Canada's indigenous peoples all featured prominently in the 15-minute address, which also hinted that new spending in these areas could require scaling back on defence.

The speech, which was written by the Liberal government and read in the Senate on Friday afternoon by Governor-General David Johnston, was just eight pages long – shorter than all but one of the seven delivered under former Conservative prime minister Stephen Harper. But it touched on most of the key commitments made by Mr. Trudeau during the recent election campaign.

"Canadians have been clear and unambiguous in their desire for real change," Mr. Johnston told the Red Chamber. "Canadians want their government to do different things and to do things differently."

Since becoming Leader of his party in April, 2013, Mr. Trudeau has targeted his political overtures at the Canadian middle class. Not surprisingly then, the Throne Speech opened with a promise that the government will deliver a tax cut to that broad swath of the public. The Liberals have said they will cut the taxes on income earned between $44,701 and $89,401 to 20.5 per cent from 22 per cent while increasing taxes on the top 1 per cent of earners.

The most obvious attempts to flag the new government's intention to do things differently from the Conservatives were contained in the section of the speech that pledged more transparency, including the end of unnecessary prorogations and omnibus bills.

"The trust Canadians have in public institutions – including Parliament – has, at times, been compromised," Mr. Johnston said. "By working with greater openness and transparency, Parliament can restore it."

Opposition leaders picked holes in the document. But their reactions were not as overtly negative as those that followed recent Throne Speeches delivered under Mr. Harper.

She also expressed concern that there was no mention of the fight against Islamic State terrorists. "If you're not prepared to actually name the threat, how are you prepared to take the fight to the threat?" she asked.

NDP Leader Tom Mulcair said he was happy to see a pledge not to abuse omnibus bills in Parliament. He also said he was "thrilled" to see that establishing a nation-to-nation relationship with First Nations, Inuit and Métis will be a priority. Next week, Mr. Trudeau will address a special chiefs assembly in Gatineau, Que.

However, the NDP Leader expressed concern at the lack of attention given to issues such as reforming the controversial Bill C-51 on national security and the fact that the Liberal pledge to keep the qualifying age for Old Age Security at 65 was not mentioned. And "frankly, I was shocked that there's not a single reference to child care in the whole Throne Speech," he said.

The government devoted an entire page of the speech to environmental issues, promising, among other things, to work with the provinces on pricing carbon emissions and to introduce new environmental-assessment processes.

There were also commitments to enhance the Canada Pension Plan and the Employment Insurance system, and to make postsecondary education more affordable.

Mr. Johnston said the government "will launch an open and transparent process to review existing defence capabilities, and will invest in building a leaner, more agile, better-equipped military" – a strong hint that the Armed Forces may have to do with less.

And, in repeating a promise that the Conservatives tried to use against Mr. Trudeau during the election campaign, Mr. Johnston said the Liberal government "will legalize, regulate and restrict access to marijuana."

A clear challenge facing the Liberals is that federal revenues over the coming four years likely won't be strong enough to fund the promises outlined in the party platform and the Throne Speech.

The Parliamentary Budget Officer has warned that the government's revenue forecasts are optimistic, while some economists say the Liberals have overestimated the amount of revenue that will come from the new tax hike on income earned above $200,000.

The speech ended with an acknowledgment that the Liberal agenda is "ambitious." But, said Mr. Johnston, the government intends to "make real change happen." 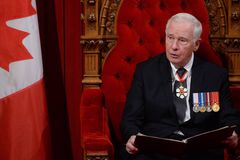 Looking for hints in what was left out of the Liberals’ Throne Speech
December 4, 2015 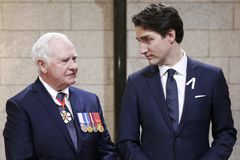