The Ontario government plans to compel chain restaurants to post calorie counts on their menus and menu boards in a bid to curb childhood obesity.

The province, which is looking to change consumption habits as a method of wrestling down long-term health care costs, will also consider bringing in new rules to limit advertising of unhealthy food to children.

"We announced what parents have been asking for, and that is that they get the information they need to make healthy choices for their kids," Health Minister Deb Matthews said Wednesday at Queen's Park. "We're making the healthy choice the easy choice for parents."

The move was recommended this year in a report by the government's Healthy Kids Panel, which was tasked with investigating weight issues in children.

Ms. Matthews said she will introduce a bill in the spring to make larger eateries put calorie information next to prices on their menus and boards. Smaller "mom-and-pop" restaurants will not have to post the counts. The government will hold consultations to determine what exact size a business will have to be before it is subject to the rules, whether to order other other nutritional information be put on menus as well and what advertising regulations to bring in.

"We know that advertising works and we know that 80 per cent of the advertising aimed at children is for unhealthy foods," she said. "We want to work with industry, we want to listen to others about what steps we need to take to protect kids from advertising both on the air and at point of sale."

The New Democrats have repeatedly introduced calorie-count legislation, but it has never come for a final vote in the legislature. If the NDP and minority Liberals co-operate, they could pass Ms. Matthews' s version of the bill.

Ontario is following the lead of several other jurisdictions. Quebec has long-standing restrictions on advertising fast food to children. New York City has required calorie counts on menus since 2008.

The Ontario Medical Association, the Heart and Stroke Foundation and McDonald's restaurants all support the government's move. Ms. Matthews even announced the plan at a McDonald's outlet in downtown Toronto.

The Canadian Restaurant and Foodservices Association, however, argues that calories don't tell the full nutritional story, and that they should not be printed on menus. Instead, it says more detailed nutrition information should be made available on restaurant websites.

"Today's announcement is about politics, not health," James Rilett, a CRFA vice-president said in a statement. "Monitoring and policing calorie-posting programs comes with a significant cost, and there is no indication where the government will find the money."

It is not entirely clear to what extent such programs work. The Healthy Kids Panel pointed to research that suggested Quebec's advertising laws led children there to eat less fast food. A New York University study in 2009, meanwhile, suggested that customers of four fast-food chains in New York City actually bought food with slightly more calories than average after the calorie-count laws went into effect.

On UN visit, PM pushes for improved health for mothers, children
May 11, 2018 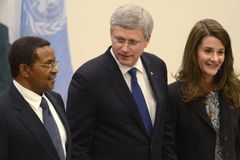 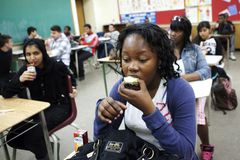