Bill C-63, Finance Minister Bill Morneau's second budget bill of the year, enacts a wide range of measures related to his March budget. Like the first budget bill, it is more than 300 pages, repeating a practice that has faced opposition criticism for lacking transparency.

The bill includes a new law called the Asian Infrastructure Investment Bank Agreement Act, which sets the terms for Canada's relationship with the emerging bank.

Mr. Morneau's March budget made one reference to the bank, stating that Ottawa would be contributing $256-million over five years to the Asian Infrastructure Investment Bank (AIIB). Yet, the budget bill gives the Finance Minister the authority to transfer up to $375-million (U.S.), which is about $480-million in Canadian dollars. A Finance Department official said the legislation would give Canada the flexibility to buy more bank shares than the current plan of $256-million if desired.

Canada's decision to join the more than 60 countries participating in the AIIB was announced the same week as the 2017 budget was released. The bank is viewed as China's counterweight to the U.S.-led World Bank and Japan's Asian Development Bank. It is also part of China's One Belt One Road policy of expanding its international influence through infrastructure.

Since the bank's launch in 2015, it has funded several large infrastructure projects throughout Asia, including a flood management project in Manila, electrical transmission work in India, a highway in Pakistan and a natural gas pipeline in Azerbaijan. The bank, which has more than $100-billion (U.S.) in available capital, received a AAA credit rating from Moody's Investors Services earlier this year.

Canada's participation in the AIIB comes as Prime Minister Justin Trudeau has sent clear signals of his desire to expand trade links with China. These efforts coincide with a period of considerable uncertainty regarding the future of Canada's economic relationship with the United States in light of ongoing talks to renegotiate the North American free-trade agreement.

Mr. Trudeau said on Friday that the transaction will receive a full review under the Investment Canada Act.

Neither the United States nor Japan have joined the AIIB and Canada did not express support under Conservative prime minister Stephen Harper. Canada's decision to sign on was a concrete sign of Mr. Trudeau's efforts to forge a deeper relationship with China, where the Prime Minister's father, former prime minister Pierre Trudeau, is highly regarded for establishing diplomatic relations with the People's Republic of China in 1970.

Mr. Morneau's first budget bill, C-44, came within a vote of being blocked in the Senate in late June largely because many senators opposed the fact that it included new legislation creating the $35-billion Canada Infrastructure Bank.

Many senators said the Finance Minister should have introduced the Canada Infrastructure Bank Act as a stand-alone bill, so that it could have received more detailed scrutiny. The Senate chose to hold several hearings specifically on the infrastructure bank aspects of the first budget bill.

"If they're proud of the policy, if it's something that they're wanting Canadians to know about, then don't bury it in hundreds of pages," he said. Mr. Cullen noted that Parliament has received little information about Canada's role in the AIIB and the Trudeau government's broader plans to strengthen ties with China.

"This is clearly part of the China agenda with Trudeau," he said. "The challenge with that entire agenda is it's been low on transparency and high on ambition. I think Canadians are right to raise concerns about what exactly it is that we're offering to China."

What is Canada’s economic game plan with China? Subscriber content
May 17, 2018 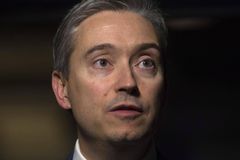