Bill Morneau delivered what he called a good news fiscal update Tuesday as Canada's Finance Minister and his Liberal colleagues hope to turn the page on what has been a string of very bad days.

A surprisingly strong economy will generate an $8.9-billion improvement to Ottawa's finances this year, the update revealed, allowing the Liberal government to forecast smaller deficits and to announce increases to programs aimed at low- and middle-income Canadians. That new spending will hit Canadians' pocketbooks ahead of the scheduled fall 2019 federal election.

But the positive news falls short of promising a balanced budget, leaving Mr. Morneau on the defensive over why the Liberals have abandoned a campaign promise to erasing the deficit before the 2019 election.

Globe editorial: Falling deficits, and the future of Canadian politics

Morneau's unexpected windfall is a bit of a mirage

Titled "Progress for the Middle Class," the annual fall fiscal update is being used by the government to make the case that its core policy agenda of shifting tax cuts and benefits away from the rich in favour of middle- and low-income Canadians is successfully boosting growth and employment.

Mr. Morneau's update comes after he endured a prolonged controversy over a package of small-business tax proposals that he introduced in July and revised last week. Mr. Morneau has also faced criticism after The Globe and Mail revealed that he has not placed his substantial personal wealth in a blind trust, something he has since promised to do along with selling off his shares in his former company, Morneau Shepell.

Virtually all of the new fiscal room that has materialized since the March budget will be put toward lowering the deficit this year.

However, the update announces two new policy measures that will have a combined annual cost of $1.9-billion a year by 2021-22. The government is moving up its timeline by two years for indexing the Canada Child Benefit to the cost of living. This will now occur as of July, 2018, ahead of the next election. The government also announced Tuesday that it will enhance the Working Income Tax Benefit by $500-million a year starting in 2019, with further details to come in the 2018 budget.

The deficit is projected to come in at $19.9-billion this year, compared with the $28.5-billion forecast in the March budget, including adjustments for forecasting risks. The fall update projects that annual deficits will decline gradually over time, reaching $12.5-billion in 2022-23, the final year of the forecast.

Speaking with reporters, Mr. Morneau defended his decision not to set a target for balancing the books. He said Canadians voted in 2015 for a government that would invest in Canadians and he noted that the debt-to-GDP ratio is on track to decline to levels not seen since the 1970s.

"That's the balance we sought back in 2015," he said. "And all I can say is to the people who told us back then that we should be balancing the budget at all costs: Look at the results. Our decision to have faith in Canadian families has put us in a position where we have the fastest growth among G7 countries."

Tuesday's update said private-sector economists now expect the Canadian economy to grow by 3.1 per cent in 2017, up from the forecast of 2 per cent in the March budget. The update noted that over the past year, the Canadian economy grew by 3.7 per cent, which led the G7 by a considerable margin, with the United States in second with 2.2-per-cent growth.

The Canada Child Benefit was a signature Liberal campaign pledge. It was enacted in the Liberal government's first budget by replacing three other programs aimed at families with children.

The $22.9-billion program shifted spending away from the highest-income Canadians and increased the benefits for middle- and lower-income families. The program's benefits were not indexed to inflation, but the government had pledged that indexation would begin in 2020.

Earlier this month, Bank of Canada Governor Stephen Poloz told reporters that the CCB has had a "pretty significant" impact on the Canadian economy. He said it may have boosted workforce participation rates by giving families enough money to afford child care rather than staying at home with young children.

At an annual cost of about $1.2-billion, the Working Income Tax Benefit is a much smaller program than the CCB. The goal of the WITB is to address concerns over the so-called "welfare wall," where some low-income individuals may not see much benefit in working more because of potential clawbacks in social assistance.

The refundable credit is worth up to $1,028 for single individuals without dependents and $1,868 for families.

"The minister is definitely trying to extract himself from the crisis he created," said Conservative finance critic Pierre Poilievre, who also expressed concern with the size of the Liberals' projected deficits and the lack of a target to eliminate them. "Instead, there are deficits as far as the eye can see. They don't project ever returning to a balanced budget in this document."

Former parliamentary budget officer Kevin Page, who is president and CEO of the Institute of Fiscal Studies and Democracies at the University of Ottawa, said Mr. Morneau is "struggling" to explain why he is not working to erase the deficit during good times.

Mr. Page said that if the Finance Minister is willing to fund new announcements with deficit spending in a fall update, that suggests there will be more deficit-financed spending to come in the 2018 budget.

"The fact is the stock of debt is going up and we'll have to finance that stock of debt," he said. "Interest rates are going to go up so we're going to pay higher interest costs and there will be less room to move for future generations."

The update also provided a breakdown of nearly $10-billion in new spending over six years that has been approved since the March budget. Those measures include $1.2-billion for Fisheries and Oceans Canada and the Canadian Coast Guard for "mission-critical" services and $760-million for Canadian diplomatic missions abroad. 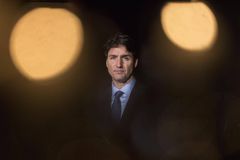 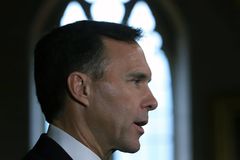 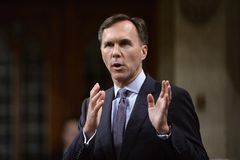