The Trudeau government's second budget will include a host of measures specifically aimed at improving the lives of women, including a plan to fund new child-care spaces, extend maternity and paternity benefits and address sexual assault.

The budget will also increase defence spending, The Globe and Mail has learned, but details won't be released until Ottawa completes a formal defence policy review later this year. And The Globe has also been told there will be a "pretty substantial investment" in affordable housing and child care, providing the first clear breakdown of its "social infrastructure" plans.

The government is not saying how it will pay for any new spending or what specific tax measures would be included in the budget. But an official said the Prime Minister believes higher income Canadians should share the heavier load of taxes.

The Trump administration in the United States has urged Canada and other North Atlantic Treaty Organization allies to boost overall defence spending to 2 per cent of GDP. Canada spends just more than 1 per cent, although the budget will not close that gap.

"Obviously with the U.S. being our biggest ally – both in NORAD and NATO – we want to make sure that there is a certain amount of complementarity between our policies and theirs, so we wanted to make sure we had a better sense of where they are going," the official said.

Another federal official said any proposals for major tax changes would not be enacted immediately and would instead be put forward for further study.

For the first time, the entire federal budget has been put through a gender-based analysis, meaning more than 60 specific measures have been rigorously studied for how they might affect women and men.

Prime Minister Justin Trudeau attracted international attention for his 2015 decision to appoint a gender-balanced cabinet and Wednesday's budget is aimed at showing the Liberal government is taking concrete measures in response to women's concerns.

A senior government official told The Globe that the budget's reference to sexual assault was inspired by the paper's series highlighting the uneven approaches of law-enforcement agencies when it comes to sex-assault cases.

"We have had people looking into it ever since The Globe broke the story," the official said.

A Commons committee on Monday recommended that Statistics Canada resume tracking the national rate of sexual-assault allegations and urged Ottawa to provide training for judges and police on dealing with these kinds of cases.

The overall theme of the budget will be to show continuity with the government's existing plans and to instill confidence in individuals and businesses about their economic future. That means pairing innovation policies that support business with new skills training programs for Canadian workers.

"We think it is all about skills, attracting foreign investment and investing in innovation, and that is what the budget will be about," the official said.

On infrastructure, the Liberal Party's platform pledged $60-billion of new spending broken down evenly among public transit, green projects and social infrastructure. Since then, some projects have been approved under the first two categories but there has been little movement on social infrastructure. Ottawa has spent the past year negotiating behind the scenes with provinces, municipalities and advocacy groups to decide how that money will be spent.

Jean-Yves Duclos, the federal Minister of Families, Children and Social Development who led those negotiations, signalled Tuesday that the results of those talks will be revealed in Wednesday's budget.

"You'll see," he said, explaining that the budget will show the results of Ottawa's talks with the provinces aimed at "providing quality inclusive, flexible and accessible child care, affordable child care."

Child-care advocates say they have received signals from Ottawa that the budget will announce about $500-million a year in long-term funding for child care.

Carolyn Ferns, a board member with Child Care Advocacy Association of Canada, said families are eager to see concrete measures from the Liberals on their election pledge to improve child care.

"We're a couple years in now and I think it's time to see some real action," she said. "It really can't happen soon enough."

Improving work-force participation rates among women with young children has been highlighted as a focus of the government in recent months.

Mr. Morneau's economic advisory panel released a report in February that urged the government to improve the work-force participation rates of women with children under 16. The report noted that in Quebec, which has a publicly subsidized child-care program, women aged 25 to 54 who have children under the age of 16 participate in the work force at a rate of 93 per cent of that of similarly aged men. In the rest of Canada, the rate is lower at 86 per cent. The council estimated that a similar, national program that achieves Quebec's results would add $13-billion to Canada's GDP.

The social infrastructure category has no money budgeted for the coming fiscal year. It will receive $1.1-billion in 2018-19 and that amount will rise gradually to $3-billion a year in 2026-27. The total 12-year amount is $21.9-billion.

The Federation of Canadian Municipalities has called for $12.6-billion over eight years toward affordable housing. That request was initially met with skepticism from the head of the Canada Mortgage and Housing Corporation, who suggested cities were not doing enough on their own to support affordable housing.

On trade infrastructure, a government official said the budget is expected to include spending to upgrade and revamp Canada's transportation routes to international markets.

The government's fall update, which set aside $10.1-billion over 11 years for trade and transportation, said the budget would spell out some details of how Ottawa plans to spend that money to fix congestion and bottlenecks along essential corridors and transportation hubs.

The federal budget is not expected to announce new money toward VIA Rail's proposed "high-frequency" rail. Liberal MPs had pushed hard for Mr. Morneau to support the plan to double-track parts of the rail line along the Montreal-Ottawa-Toronto corridor. The plan would allow VIA's passenger trains to offer more frequent and faster service by no longer having to wait for freight trains, which have priority on the existing tracks.

While the federally owned passenger rail company has said most of the project could be financed by the private sector, it is looking for Ottawa to spend about $1-billion on new trains. Last year's budget gave Transport Canada $3.3-million over three years to conduct an in-depth assessment of VIA's plan, but the Liberals appear to be balking at the price. 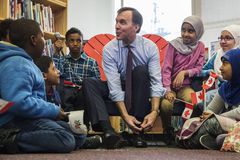 Federal budget expected to flesh out infrastructure bank plans
March 20, 2017
Follow Bill Curry and Robert Fife on Twitter @curryb @RobertFife
Report an error Editorial code of conduct
Due to technical reasons, we have temporarily removed commenting from our articles. We hope to have this fixed soon. Thank you for your patience. If you are looking to give feedback on our new site, please send it along to feedback@globeandmail.com. If you want to write a letter to the editor, please forward to letters@globeandmail.com.
Comments