The Liberal government has unveiled its plan to overhaul the assessment process for major resource projects, saying added environmental protections are needed to restore public trust in Ottawa's approval of controversial pipelines, mines and hydro dams.

In the midst of a battle between British Columbia and Alberta over a pipeline expansion project, Environment and Climate Change Minister Catherine McKenna tabled legislation on Thursday that aims to increase protection for the environment and Indigenous rights while providing greater timeliness and certainty for businesses.

Industry officials said the legislation appears to erect new hurdles for proposals, while environmental groups said it falls short by not clearly ruling out projects that would have significant adverse environmental effects.

In news conferences across the country, Liberal ministers defended the long-promised legislation, which will put one agency in charge of reviewing major resource projects and downgrade the role of the Calgary-based National Energy Board, which environmentalists often accused of having a pro-industry bias.

The legislation will reverse many changes the Conservative government adopted in 2012 to speed up approvals of pipelines and other resource projects. It would set timelines that include a limit of 600 days to review the most controversial projects.

"Canadians want a modern environmental and regulatory system that protects the environment, supports reconciliation with Indigenous peoples, attracts investment and ensures good projects can go ahead, which creates good middle-class jobs and grows our economy," Ms. McKenna said in Ottawa.

"Canadians understand that better rules will makes us more competitive, not less."

The sweeping changes come as Prime Minister Justin Trudeau is caught up in the dispute between British Columbia and Alberta over the expansion of Kinder Morgan Inc.'s Trans Mountain pipeline, which would increase tanker traffic in Vancouver harbour.

British Columbia Premier John Horgan said the Liberal reforms provide clear evidence that the government recognizes the existing system – under which Trans Mountain was reviewed – is inadequate. Mr. Horgan recently threatened to block increased volumes of diluted bitumen from the oil sands to the province by pipeline while a review of safety issues is under way.

"Does this say that the [review] processes that were in place yesterday were adequate? Clearly the federal government doesn't think so," he said. "Many British Columbians don't think so."

In Calgary, Natural Resources Minister Jim Carr said the federal legislation would not affect the Trans Mountain decision which, he noted, was subject to scrutiny beyond what the Conservatives' approach required.

Mr. Carr reiterated the Liberal government's commitment to ensure the project gets built, despite opposition from B.C., several First Nations and local municipalities. Ms. McKenna and Mr. Carr noted that, while reviewing Trans Mountain, the Liberals bolstered Indigenous consultation, earmarked $1.5-billion for ocean protection and concluded a national climate deal in which Alberta agreed to cap greenhouse gas emissions from the oil sands.

"The federal government will ultimately not allow any province to infringe on its jurisdiction over the national interest, full stop," Mr. Carr said in an interview.

Conservative MP Ed Fast said the new rules will bog down the review process and be the "death knell of major resource development in Canada."

Steve Williams, chief executive officer of Suncor Energy Inc., Canada's largest oil sands company, warned that higher taxes and regulations are making Canada a difficult place to invest. "Other jurisdictions are doing much more to attract businesses, so Canada needs to up its game," Mr. Williams said in a conference call on Thursday.

Asked about those comments, Ms. McKenna responded: "Canada just upped its game today. These better rules will ensure we attract investment." She said the changes would allow timely approvals of good projects, though she acknowledged there will still be opposition.

Under the legislation, a proposed resource project will be assessed on its overall sustainability, including economic and social effects; its environmental effects and ability to mitigate them; how it affects Indigenous rights; and whether it is consistent with Canada's commitments to fight climate change.

For major projects, the minister of environment or cabinet will make the final decision, based on recommendations from the agency or a review panel.

Chris Bloomer, CEO at the Canadian Energy Pipelines Association, said the legislation would create ill-defined obstacles. "It's introduced a whole bunch of broad public policy issues into the evaluation process and we need to understand how these are all going to mesh and how that's going to impact the timing of the processes and what policy issues are going to evolve from that," he said.

The legislation would give Indigenous people more say over development in their territories.

Companies would have to engage in more formal consultation with Indigenous communities before applying for federal approval, and work to win their support. Indigenous rights must be acknowledged throughout any review process, and consideration of Indigenous traditional knowledge would be mandatory. Indigenous Canadians would be directly involved in reviewing projects, monitoring effects and ensuring companies live up to conditions imposed by regulators.

The United Nations Declaration on the Rights of Indigenous Peoples calls for the communities to have "free, prior and informed consent" over projects in their regions, but a briefing document said Ottawa will merely "aim to secure" it. Ms. McKenna said Indigenous issues will be central to the process, but that the federal government must base its decision on the overall public interest.

Perry Bellegarde, National Chief of the Assembly of First Nations, said the legislation makes some important steps toward reconciliation but there is "room for improvement," that the AFN will aim to secure.

"We welcome the recognition of Indigenous peoples' rights at every stage of the process," Mr. Bellegarde said in an interview.

With reports from Jeff Lewis in Calgary, Ian Bailey in Vancouver and Gloria Galloway in Ottawa

Here are some highlights of the environmental legislation introduced Thursday by the federal government: 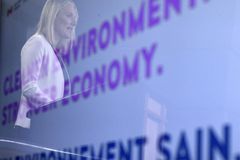