The federal Liberals are looking to push more of the billions they plan to spend on infrastructure in the next decade directly into flood mitigation, hoping to avoid repeats of disasters in Quebec and Ontario this month.

Infrastructure Minister Amarjeet Sohi said the idea the Liberals will promote to provinces, territories and cities is to agree to spend the money over and above the $2 billion already set aside to help local governments defend against natural disasters like fire and flooding.

The move could potentially save the government hundreds of millions annually in disaster relief payments, which are expected to rise over the coming years.

In a report last year, the parliamentary budget officer estimated that payments through the disaster financial assistance arrangements could increase to more than $900 million a year over the next five years, including $673 million a year for flooding. Both costs are well above past averages paid out from the fund.

Through funding agreements with provinces and territories, Sohi said the government wants "to negotiate language around dedicating resources towards flood mitigation and other disasters.

"It's a concern and we definitely want to have those conversations with provinces and territories."

The push for more disaster funding will be part of what Sohi calls a "green lens" that local, provincial and territorial governments will use on proposed infrastructure projects before they can be approved for federal funding.

Sohi said the lens puts the focus on reducing greenhouse gas emissions during and after construction, as well as mitigating the impact of severe weather to reduce the cost of disasters on communities.

"Not only the human cost and the pain, the anxiety that it causes and the disruption of life for people, but also the economic cost to clean up afterward and the impact on the overall economy. This is part of our broader infrastructure plan."

Sohi made the comments during a roundtable interview this week with The Canadian Press.

The green lens will be part of the second phase of the Liberals' infrastructure plan, which is to dole out $81.2 billion on new, large-scale projects in cities and provinces over the next 10 years.

The money will flow only after provinces and territories sign funding agreements with the federal government, which will take months to conclude because of the size and scope of the plan.

Federal officials have been wrestling with how to frame the requirements in the upcoming funding agreements to make sure the money spurs more projects, known as incrementality in federal parlance, and not have provinces and cities replace planned spending with federal dollars.

Internal government documents show that municipalities in Ontario in particular have pushed the government to recognize their long-term capital plans as meeting the federal requirement for incrementality.

A January briefing note to Sohi ahead of a meeting with the Association of Municipalities of Ontario recommended the minister reiterate the government's position that federal funding should not "have the unintended negative consequences of displacing investment by the provinces or municipalities over time."

The Canadian Press obtained a copy of the document under the Access to Information Act.

Sohi said the Liberals may provide some flexibility in the funding to allow for refurbishment projects, rather than new builds.

"Under Phase 2, the long-term plan, we will be supporting more new infrastructure. There will be some flexibility to rehabilitate the existing infrastructure, but these will be new plans or plans that they (cities) have in place, but there is no funding attached to it. These will be the new projects that we will fund."

Quebec announces increase in financial assistance for flood victims
May 17, 2017
Montrealers face massive cleanup in wake of flooding
May 14, 2017
Anatomy of a deluge​: Are the Quebec floods a sign of things to come?
May 10, 2017 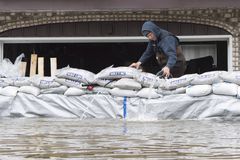