Veteran Ontario MP Lisa Raitt has launched her bid to become the next Conservative Party leader, joining a crowded race as one of the front-runners to replace Stephen Harper next May.

Ms. Raitt, a former cabinet minister in Mr. Harper's government, declared her intentions in a brief Facebook video posted on Wednesday. An official announcement is set for Thursday.

"I'm running to lead the Conservative Party of Canada, and I can win in 2019," Ms. Raitt said in the video, which chronicles her humble roots in Cape Breton, N.S.

In the video, Ms. Raitt said she is the candidate who can go up against Prime Minister Justin Trudeau in the next election.

"Canada needs a leader who is going to fight for the striving many, not just the privileged few," she said.

"We need a leader who will beat Trudeau in the next election, who knows what Canada looks like from the bottom. Who will work to create opportunity for every striver, at every age. I will be that leader."

First elected in 2008 in the Greater Toronto Area riding of Milton, Ms. Raitt served as natural resources minister, labour minister and transport minister during the Harper era, and she recently stepped down as her party's finance critic in preparation for her leadership bid. She also served as chief executive of the Toronto Port Authority.

During her tenure at natural resources, Ms. Raitt was caught on a recording calling the shutdown of Chalk River's nuclear isotope production facility "sexy" because it had to do with cancer. Ms. Raitt offered an emotional apology in the House, noting she had been deeply affected by the disease – her brother, Colin, died at the age of 36 from lung cancer.

While seen as likeable and competent, Ms. Raitt's lack of French is seen as a hindrance to her campaign. However, she is said to be learning the language and also posted a French version of her video.

Ms. Raitt, the mother of two sons, was married in September to Bruce Wood, president and CEO of the Hamilton Port Authority. She recently told CTV's Power Play that Mr. Wood has been diagnosed with early onset Alzheimer's, and she spoke in the House of Commons about the need to talk openly about the disease.

Ms. Raitt's announcement drew praise from former cabinet minister Peter MacKay, widely seen as the favourite to lead the party until he decided not to run.

Mr. MacKay said Ms. Raitt's entry into the race is a positive development that will cause others "to up their game."

"She is whip smart, tenacious, but also humble and true to her roots," Mr. MacKay wrote in an e-mail.

He added that Ms. Raitt, along with Mr. Alexander and Mr. O'Toole's candidacy, turn this "into a truly competitive and extremely interesting contest for Conservatives and in fact all Canadians."

The race has so far been defined by immigration issues. Ms. Leitch first proposed the idea to screen immigrants for "anti-Canadian values," igniting a debate about immigration policy and Canadian identity. Mr. Blaney, the former public safety minister, has since proposed a ban on the niqab at polling stations, citizenship ceremonies and in the federal public service, and, on Wednesday, he said he would strike a "royal commission on Canadian identity" to examine past and current challenges to the Charter of Rights and Freedoms.

Mr. Alexander, the former immigration minister who lost his seat in 2015, officially launched his campaign this week. Widely criticized for his handling of the Syrian refugee crisis and for announcing, along with Ms. Leitch, a "barbaric cultural practices" tip line during last year's federal election, Mr. Alexander is now calling for immigration to be increased to 400,000 people a year.

Mr. Chong, meanwhile, announced on Wednesday he would cut federal income tax and corporate taxes with revenue from a tax on carbon emissions. 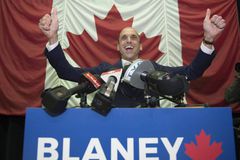 B.C. MP Peter Julian quits as NDP House leader to explore leadership bid
October 19, 2016
Ex-MP Andrew Saxton, businessman Rick Peterson join list of Tory hopefuls
October 18, 2016
Erin O’Toole launches Conservative leadership bid as Lisa Raitt edges closer
October 14, 2016
Follow Laura Stone on Twitter @l_stone
Report an error Editorial code of conduct
Due to technical reasons, we have temporarily removed commenting from our articles. We hope to have this fixed soon. Thank you for your patience. If you are looking to give feedback on our new site, please send it along to feedback@globeandmail.com. If you want to write a letter to the editor, please forward to letters@globeandmail.com.
Comments