A Toronto man who joined the New Democratic Party seven months ago is asking a judge to overturn the party's decision to bar him from becoming a candidate in the current national leadership race, saying the disqualification process was both secretive and unfair.

Brian Graff, who dabbles in real estate but has been unemployed since 2011, filed an application in the Ontario Superior Court on Wednesday asking that the federal party be required to reconsider its decision "in accordance with a fair process."

Mr. Graff's lawyer, Nader Hasan, said the case shines light on the power of political parties to decide, on behalf of Canadians, who will be the country's political leaders.

The parties' "argument is they are the gatekeepers and they get to make the rules," Mr. Hasan said in an interview with The Globe and Mail. "Our argument is that, because of the vital and public role that they play in narrowing down the class of people from whom the rest of Canada selects it leaders, they have to respect basic rules of procedural fairness."

Mr. Graff was a Liberal until August, when he took out membership in the NDP. In October, he informed the party of his intention to run for leader because, he says, he did not see any candidate stepping forward to talk about the issues he considers most important, including unemployment.

"I wanted to see a really vibrant race with lots of opinions expressed, lots of ideas," said Mr. Graff, "because I think the NDP needs to consider reforming itself or changing or whatever because it's never formed a federal government."

According to the application filed in court, Mr. Graff repeatedly asked for a list of criteria against which candidates are judged but it was never provided to him. Then, on Dec. 20, 2016, he was advised by Robert Fox, the party's national director, that his candidacy was not accepted.

A party official is quoted in the court documents as saying this is the first time in NDP history that someone has been told they are not qualified to run for leader.

Mr. Graff said he was never given reasons for that decision but was told he had 48 hours to appeal – something he says he did without knowing the reasons he had been rejected. On Dec. 28, the appeal was thrown out by NDP officials, "again without providing him with any reasons, explanation or basis for their decision," says the court application.

"The NDP's conduct is particularly shocking given that it is a political party that prides itself on openness, transparency and equal opportunity," says the document.

Mr. Graff's application for judicial relief was filed just before the court offices closed for the day so party officials were not able to view them Wednesday. But Mr. Fox said the party "most certainly" has the right to decide who can run for its leadership and the rules are explicit about that. "We are absolutely confident that the process we have established is just and fair and that we've followed the procedures properly," said Mr. Fox.

MPs Niki Ashton, Charlie Angus, Peter Julian and Guy Caron are officially in the leadership race to replace Tom Mulcair, who was voted out of his job a year ago by party members at a convention in Edmonton. Ballots to decide the winner will be cast in October.

Mr. Graff said he is not taking legal action solely for his own benefit. "As a member of the party," he said, "I don't want the party saying who I, as a member, can't vote for."

The court document also points out that, even if the party allows him to run for the leadership, he will have a difficult time raising the $30,000 that is required of all candidates and collecting 500 signatures of party members. At this point, he has no base of support.

Mr. Hasan said there is no question that the New Democratic Party has the right to decide who can run to be its leader.

"We're saying that, if they want to vet out people, they at least have to respect basic principles of procedural fairness in a transparent and open way," said Mr. Hasan. "This is not a closed club. This is not like a fraternity or a religious order where decisions affect only their own members. This has implications for all of Canada." 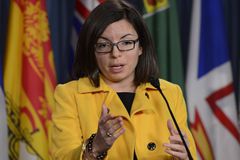