The moment in the Quebec election campaign was symbolic, captured on video and spread far and wide: Pauline Marois put Pierre Karl Péladeau in his place.

As she faced questions with Mr. Péladeau at her side Thursday, the Parti Québécois Leader nudged her star candidate far from the microphone. The reason became clear: It was not part of the plan when Mr. Péladeau brought Quebec independence to the front of the election campaign, and it was now time for the media magnate and separatism to move to the rear.

The question that she took instead of him involved conflict of interest and the tentacles of Mr. Péladeau's holdings that reach deep into the government he hopes to help form, but on Thursday, Ms. Marois's singular mission was to get the Parti Québécois message of good government back on track.

Ms. Marois brushed off questions about sovereignty and Mr. Péladeau, who burst into politics Sunday saying his one top priority is to make Quebec independent, refused to answer them.

"We are in an election campaign. We are not in a campaign for the future of Quebec. When Quebeckers go to the polls on April 7, they will vote for a government," Ms. Marois said.

It was far from Mr. Péladeau's declaration, stated time and again in recent days, that he's only in politics because he wants to create a new country for his children. But a poll released in Quebec City Thursday, where the PQ was campaigning, clarified why the party needs to get away from the referendum track.

The poll of 11 ridings in Quebec City region by Léger Marketing, conducted in the days since Mr. Péladeau and the separatist question moved to the fore, found Liberals have burst into a substantial lead, gaining seven percentage points since the firm's last poll of the region was published on March 5. PQ support was relatively flat, with much of the Liberal gain coming at the expense of the Coalition Avenir Québec.

Six of the Quebec City seats are currently held by the CAQ, while the Liberals have three, and the PQ two. The city is more conservative and less nationalist than most francophone areas of the province. But the poll underlined the danger facing the PQ of an unabashed pursuit of independence, which has been off the radar for years for most Quebeckers.

Still, Mr. Péladeau's arrival energized sovereigntists, who account for about four of 10 Quebeckers, and many who had given up on the dream of independence. But PQ strategists fear they were feeding the Liberals' attempt to frame the April 7 ballot question around the possibility of a third referendum.

"Our people were really excited, we had to calm them down," a PQ strategist said.

Liberal strategists were thanking the political gods for the gift, and not only on the referendum ballot question. Ethical questions about Mr. Péladeau holding on to his controlling interest in 40 per cent of Quebec's media, and now Ms. Marois's attempts to put a lid on sovereignty, will only keep the question top of mind, one Liberal strategist said.

Mr. Péladeau has refused to sell his controlling shares in Quebecor Media Inc., saying he will let the ethics commissioner decide what needs to be done, should Mr. Péladeau be elected.

But the complex ethical questions surrounding Mr. Péladeau's candidacy were put on display Thursday with a report by his own paper, Le Journal de Québec, which showed one of his companies has $13.5-million in provincial government computer contracts.

After guiding Mr. Péladeau away from the microphone, Ms. Marois answered the question – posed by one of Mr. Péladeau's own reporters – by saying the contracts are awarded by a tendering process that never reaches the cabinet table.

The plan now for the PQ is to return to square one, with a promise of a white paper and hearings on sovereignty while also attacking Quebec Liberal Leader Philippe Couillard's own constitutional plan.

Campaigning in the staunch federalist region of the Beauce, Mr. Couillard said he would be happy to pursue a constitutional agreement with the rest of Canada in talks that could include the Senate reform and First Nations issues – but only on the condition Quebec's traditional demands are on the table, and that the talks have the "near certainty" of success.

Lost in the polarized electorate is the Coalition Avenir Québec, whose foothold of six seats in the Quebec City region appeared to be in jeopardy with Thursday's poll. Leader François Legault admitted he was concerned an election that turns on sovereignty could lead to a stampede away from his third party as Quebeckers choose one of the two main camps. "There is that risk," he said.

Mr. Couillard suggested a polarized electorate may not be limited to Quebec City. "People realize they cannot split the vote," he said.

But one provincial capital poll result, a mere snapshot in the early days of a 33-day campaign, is not a great barometer for the province. In the 1995 referendum, Quebec City voted Yes, but it vastly underperformed separatist expectations and has traditionally been relatively hostile territory for the PQ.

While the PQ shifted strategy, the Liberals showed no sign of letting up on their determination to put independence on the table. Mr. Couillard again drove home his message that while the PQ dreams of a separatist referendum, his campaign is rooted in hard economic reality. And as he has done throughout the week, he threw out a barb on a potential referendum, hoping to hook Ms. Marois to the topic again.

When asked about the wording of a potential referendum question – the kind of hypothetical politicians usually try to avoid – he pointed to next fall's referendum in Scotland.

"The example of the United Kingdom is very interesting: 'Do you want Scotland to become an independent country? Yes or no,'" he said.

He attacked Ms. Marois's suggestion Quebeckers could have some kind of dual citizenship and keep their Canadian passports. Mr. Couillard has even declared himself ready to lead the No side in a potential referendum, all while stressing none of this will be necessary under a Liberal government.

"Every arrangement between two parties requires consent of two parties," he said. "She's trying to separate Quebec from Canada by suggesting there will be no consequences.

"Nine billion in equalization? A detail. Canadian passport? It's beautiful, we'll keep it. Currency? Oh sure, we'll keep that too. ... I'm sorry, it's amateurish," he said.

Mr. Couillard's campaign embarks on a two-day tour of far-flung regions of Quebec Friday, while Ms. Marois plans to concentrate her efforts in the Montreal area. 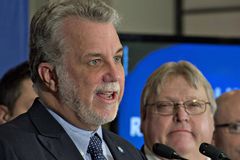 Loonie or no, sovereign Quebec’s economic future would be grim
Subscriber content
March 13, 2014

What Quebec’s election ads reveal about the campaign
March 13, 2014
Quebecor waiting on Ottawa before expanding out of Quebec
March 13, 2014 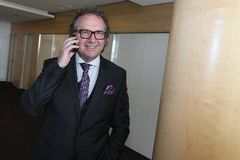