Health and education will remain funding priorities as Ontario makes deep cuts to trim a $16-billion deficit, but doctors, teachers and everyone on the public payroll has to do their bit to help, Premier Dalton McGuinty said Thursday.

"We're all going to have a role to play if we're gong to be as effective as we need to be in terms of strengthening this economy and ensuring that we're getting ever more value for the public dollars that are being invested," McGuinty said at Wilfrid Laurier University.

Economist Don Drummond has said he will make some difficult and unpopular recommendations in his review of the province's public services, suggesting spending cuts as deep as 30 per cent in some ministries.

However, Mr. McGuinty suggested the Liberal government will not follow through on all of the several hundred recommendations Mr. Drummond is expected to make later this month.

"After we have received those recommendations, we will ask the legislature to help us by giving the best advice on those, and we also want to give Ontarians an opportunity to comment as well."

The deep spending cuts that are expected in the spring budget will not have the same impact in schools and hospitals as the cuts implemented by former Conservative premier Mike Harris in the 1990s, Mr. McGuinty said.

"What I can assure Ontarians is that their values will be our government's values," he said.

"We will do everything we can to protect our health care, protect our education and put in place the kind of measures that can support a stronger and growing economy."

The New Democrats were concerned that a squabble over the makeup of legislative committees in the minority government meant there were no pre-budget hearings going on, work they said should be done now in conjunction with Mr. Drummond's report.

"I'm pretty concerned about the dysfunction around here, and the fact we're not having those pre-budget conversations early on," NDP Leader Andrea Horwath said in an interview.

"There's no doubt priorities have to be set, and people can rely on New Democrats to fight for things like our health-care system, and making sure that everyday folks who are struggling don't bear the brunt of this upcoming budget."

The Progressive Conservatives said they have no confidence that Mr. McGuinty will make the spending cuts that Mr. Drummond is expected to recommend in his report.

"We don't have any inclination to believe that Dalton McGuinty and his government is going to make the tough decisions necessary to get our fiscal situation back in line," said Opposition critic Rob Leone.

"We think Drummond's going to present ideas that we've been proposing for a very long time, and we hope that the government considers those ideas."

The Liberals already rejected the Tory call for a legislated wage freeze for about one million public sector workers, and also opposed the Conservatives' plan to overhaul Ontario's apprenticeship system, a plan the Tories say would create 200,000 skilled trades jobs.

Mr. McGuinty also left the door open Thursday to delaying a planned cut in the province's corporate tax rate, from 11.5 to 10 per cent, which is scheduled to go into effect Jan. 1, 2013.

When asked whether he would delay the business tax cut so companies also "share the pain" of the looming spending cuts, Mr. McGuinty said only that he didn't want to speculate on what would be in the spring budget to be introduced in March.

He then dismissed suggestions that he was backing off the scheduled tax cut.

"I appreciate your interpretation of my words, but I'll just use the words," Mr. McGuinty told reporters.

"We want to be fair when it comes to finding the best way possible to addressing our economic challenge."

The government must "hit the pause button" on the corporate tax cuts, Ms. Horwath said.

"They can't complain that the cupboard's bare and then continue with their corporate tax giveaways," she said.

"As long as you keep letting corporate taxes hit rock bottom and forgo those revenues, then you're not taking a balanced approach."

Mr. McGuinty was at the university to announce that people could apply online starting Thursday for the government's 30 per cent tuition rebates for college and university students from families with incomes under $160,000 a year.

"We think at this point in time, with a $16-billion deficit, we need to fix that problem before we start creating these new ideas about where we're going to spend money," Mr. Leone said.

"With the deficit and a $250-billion debt in Ontario, these students once they graduate are going to have a whole lifetime of paying for the excesses of this government." 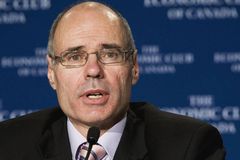 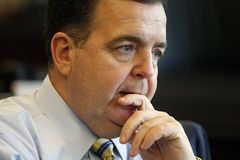 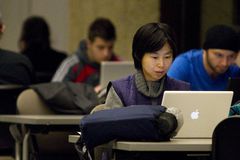 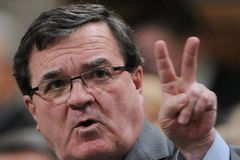 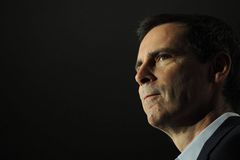