Mexico is pushing for a continental approach to energy, with a top official saying all three countries should use their resource wealth to boost the strength of the North American economy.

Ahead of this week's "Three Amigos" summit, Ildefonso Guajardo, Mexico's secretary of economy, told The Globe and Mail that the Keystone XL pipeline could benefit Canada, the United States as well as his own country.

"I think that if Keystone is helpful to Canada, it is helpful to the North American region," he said, while avoiding comment on whether Mexico supports the project. "Because I think it is an additional strength that North America has, and we should be smart enough to use it strategically and to count on it in terms of what we have."

This week's talks in Toluca, where North American leaders are scheduled to meet on Wednesday, will provide another opportunity for Prime Minister Stephen Harper to press U.S. President Barack Obama on Canada's bid for approval of Keystone, which would move oil from Alberta to the Gulf Coast. The issue has become a growing irritant between the two leaders, and senior U.S. officials made it clear in a background briefing last week that Canada should not expect an answer on the project during this week's meetings.

The talks come as Mexico works to introduce fundamental changes to its energy sector, allowing foreign companies to invest in the country's oil and gas industry for the first time in decades. Mr. Guajardo said the reforms should boost Mexico's economy and have a "tremendous" effect on the North American manufacturing sector.

Mr. Harper arrived in Mexico City Monday afternoon and will meet separately with Mexican President Enrique Pena Nieto on Tuesday before the trilateral meetings. The Prime Minister is expected to visit TransCanada's offices in Mexico City on Wednesday, another sign that energy will be top of mind during this week's meetings. A spokesman for the Prime Minister's Office said the company was chosen because it is a "Canadian success story" that is leveraging tremendous opportunities in Mexico.

Theoretically, Mexico could stand to benefit if the U.S. decides to nix the Keystone project, because it, too, sends heavy crude to the Gulf Coast. But Mr. Guajardo said he doesn't view the North American energy sector as a "zero-sum game" and welcomes any developments that will help make the continent more competitive. "The fact that Canada has an asset doesn't mean that somebody else has to lose," he said.

Mr. Guajardo said there will be significant opportunities for Canadian energy companies under Mexico's newly liberalized system. And he said the changes should help boost North America's strength in manufacturing.

"I do believe that the next decade is going to be the decade for manufacturing in North America to become a powerhouse globally," he said, citing Mexico's relatively young population, innovations in the manufacturing sector, and continental access to abundant and cheap energy.

The three countries are expected to announce a new air transportation agreement this week, which should boost the number of direct flights between Canadian and Mexican cities, and another announcement is expected to create a new, continent-wide trusted-traveller program. Both initiatives are aimed at easing travel between the three countries and could help reduce tension over a requirement for Mexican travellers to Canada to have visas.

Canada began requiring visas from visiting Mexicans in 2009 in a bid to stem the flow of illegitimate refugee claimants from that country. But the federal government has since tightened its refugee system, prompting renewed calls for an end to the visa requirement. However, senior government sources have indicated there are no plans to lift the visas during this week's trip. 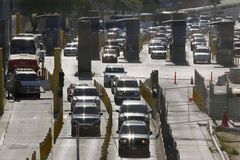 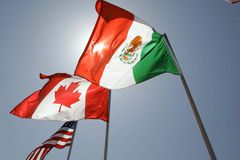 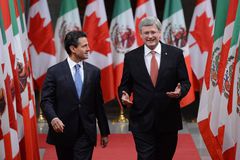 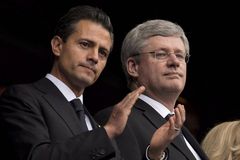 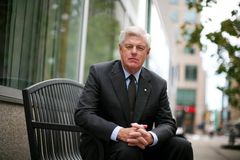