Conservative MP Michael Chong likes to point out that his three boys, who are enrolled in French immersion in Southern Ontario, have ancestors from Hong Kong, Scotland, Ireland and the Netherlands.

It has fuelled his sense that the country is populated by unhyphenated Canadians like him – people of increasingly disparate origins who are creating a "new Canada."

Mr. Chong hopes that his personal story and his vision of the country, along with ideas for an "ambitious" Conservative agenda, will allow him to face off against Liberal Leader Justin Trudeau in the next election.

Born in 1971, like Mr. Trudeau, Mr. Chong is offering "generational change" to the Conservative Party. He plans to launch his leadership bid to replace Stephen Harper on Monday morning in Ottawa, alongside his wife and children.

The MP for Wellington-Halton Hills will put a heavy emphasis during the race on modernizing Canada's democratic institutions, instead of seeking to change the electoral system, as the Liberals are trying to do.

The strategy is not surprising for a parliamentarian who made his mark by promoting the Reform Act that aimed to give more independence to individual MPs.

"We have to introduce further reforms to curb the powers of the [Prime Minister's Office] and party leaders," Mr. Chong said in an interview, arguing for stronger parliamentary committees among other things. "The PMO and party leaders control our elected legislature, and that is not healthy in a democracy."

Mr. Chong, who comes from the Progressive Conservative wing of the Conservative Party of Canada, added that he values the input of social conservatives in the party.

He said that if he were prime minister, his government would not legislate on matters related to abortion, but he added: "I won't prevent a back-bench member of my caucus from speaking up on these issues nor will I prevent them from voting freely in the House of Commons."

He will also propose an agenda based on increased trade, a robust foreign policy, lower taxes and reduced spending, with additional details to come.

Mr. Chong first generated headlines in 2006 when he resigned from the cabinet as minister of intergovernmental affairs and sport because he opposed a motion that recognized Quebec as a nation. He has no regrets, even though he never returned to the cabinet under Stephen Harper.

"Our country is becoming increasingly diverse and the way forward isn't to recognize subnational groups in this country and accord them different levels of recognition," he said.

Mr. Chong says he does think the Conservative Party made mistakes in the past election, including the failed plan to create a tip line to report barbaric cultural practices. "We lost support in certain ethno-cultural communities and amongst certain minorities because of our position on certain issues," he said. "They were mistakes and I don't think we should have done that."

He added that he admires the Liberal Party's "dominant" use of social media to attract new voters in the last election, arguing that the Conservative Party must do the same thing in coming years.

In the next election, Mr. Chong said, the Conservatives need a strong environmental policy to win back women and university-educated voters, among others, including a carbon-pricing system that would generate revenues to be used to cut personal and corporate taxes.

"The core policies of the Harper years were good policies," he said in reference to economic policies. "In areas like environmental issues and institutional reforms, we have to rethink our policies."

The other declared leadership candidates to this point are MPs Maxime Bernier and Kellie Leitch. The next Conservative leader will be chosen on May 27, 2017.

Opinion
Why Michael Chong would be a good fit as Conservative leader
March 23, 2018 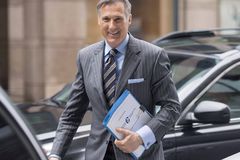