Prime Minister Justin Trudeau has backed Alberta Premier Rachel Notley over her land-locked province's need to have new pipelines to access foreign markets for its oil.

In a news conference in Davos Friday, Mr. Trudeau countered concerns from Montreal Mayor Denis Coderre and his regional colleagues that the Energy East pipeline posed an unacceptable environmental risk. The Prime Minister said provinces need to work together to ensure energy development and environment protection.

"I am solidly in one camp on this one," he said. "I am very much in the camp of both premiers, [Ontario's Kathleen] Wynne and Notley, who demonstrated that Canada can and should work together on economic issues for all of us."

Mr. Trudeau said his government is reviewing environmental assessment rules with the aim of boosting the credibility of pipeline reviews. But he sees no inherent conflict between the approval of new projects and environmental protection.

"Canadians believe that a strong economy goes hand in hand with a strong and protected environment, and that's exactly what we're committed to," he said. "I'm feeling very good about our capacity to get our resources to market in a responsible and environmentally sustainable way."

A regional debate has erupted over TransCanada Corp.'s $15.7-billion pipeline, which would move 1.1 million barrels of oil a day from Western Canada to Irving Oil Ltd.'s refinery in Saint John, N.B.

On Thursday, Mr. Coderre, who is also a former federal Liberal cabinet minister, and other Quebec municipal leaders condemned it as an environmental risk. His comments – suggesting the economic benefits from the project were slim, while the possible environmental fallout is high – provoked outrage from Western Canadian leaders, including Ms. Notley, Saskatchewan Premier Brad Wall and Calgary Mayor Naheed Nenshi.

Ms. Notley, meanwhile, also received a boost from Ms. Wynne, whom she met with at Queen's Park Friday as part of her effort to sell the proposed pipeline to her fellow premiers.

Ms. Wynne appeared more amenable to the project than she has in the past. Two factors have provoked a change, according to a government official.

According to the official, one of the influences was the Alberta government's new climate change plan, released late last year, that puts a cap on oil sands emissions. That plan, as well as the federal government's promise to strengthen the National Energy Board process, now removes some concerns Ontario had about the proposed pipeline.

"The changes that Premier Notley's government has made now make that conversation much easier, it makes it much more easier now to talk about how we can work together," Ms. Wynne told reporters. "We have come a very, very long way with the changes that Alberta has made."

Ms. Notley characterized the pipeline as a national project. "Tens of billions of dollars in revenues, to be shared among all provinces, are at stake over our access to more markets for our oil." She also emphasized that shipping oil through a pipeline is one of the safest ways of moving it to international markets.

TransCanada has promoted its pipeline as an important way to replace insecure sources of foreign oil with Canadian crude, but that has already happened in Quebec. Most crude shipped down the proposed Energy East line would be destined for export markets, although Irving Oil's Saint John refinery would process some portion of it.

As the Quebec mayors criticized the project, Alberta's Wildrose Leader Brian Jean charged that "Montreal buys millions of barrels of foreign oil from dictatorships, but it is rejecting oil from their friends in Confederation."

In fact, there are virtually no imports from outside North America coming to the two refineries in Quebec – Suncor Energy Inc.'s Montreal plant and one near Quebec City owned by Texas-based Valero Energy Corp.

Officials at both companies confirmed Friday that they can run a straight diet of North American crude in their refineries.

Jeffrey Simpson: Why the Energy East pipeline will be a key test for Liberals
Subscriber content
January 14, 2016 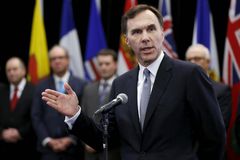 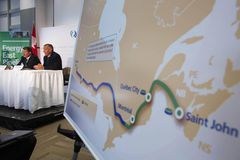 Follow Jane Taber, Shawn McCarthy and Robert Fife on Twitter @janetaber1 @smccarthy55 @RobertFife
Report an error Editorial code of conduct
Due to technical reasons, we have temporarily removed commenting from our articles. We hope to have this fixed soon. Thank you for your patience. If you are looking to give feedback on our new site, please send it along to feedback@globeandmail.com. If you want to write a letter to the editor, please forward to letters@globeandmail.com.
Comments