A federal move to regulate mask-wearing at large gatherings could face a litmus test as early as this week, as events in Montreal help foreshadow whether such a plan will do more good or harm.

A local bylaw under discussion might offer an early demonstration of whether such a ban actually cuts down on violent protest — or helps inflame it, while creating additional headaches for police and backlogs in the justice system.

The bylaw will be studied by the city's public-safety committee Wednesday and could be adopted by the end of the week. If that happens, the protest-charged city will become something of a laboratory for a coast-to-coast crime-fighting experiment.

Elsewhere in the country, a private-member's bill, C-309, is progressing through the House of Commons after easily passing second reading, and it could become Canadian law within months.

The move by Montreal's mayor, Gerald Tremblay, is a response to the near-daily demonstrations that have cost the city millions in lost productivity, along with some smashed windows, clashes with police, and numerous injuries. The proposed rules would give police the power to fine those wearing masks, with penalties ranging from $500 to $3,000.

Such a prospect creates a chill among civil libertarians.

"The concern is that both Bill C-309 and Montreal's bylaw will give police free reign to arrest anyone wearing a mask," said Andrew Lokan, a lawyer and external council to the Canadian Civil Liberties Association.

Mr. Tremblay's decision to rush the bylaw out quickly — it was originally scheduled for adoption next month — means it would come into effect before the city's Formula One race in June, one of the biggest draws of the tourist season.

Montreal has already backed away from a previous attempt at such a bylaw. In 2009, Claude Dauphin, then head of public security for the city, cited a lack of research as the main reason behind the policy's indefinite postponement.

Now there are hints of trouble again, with groups of protesters in colourful masks having gathered for raucous rallies around Montreal's city hall this week.

There have been whispers online that any mask ban will simply encourage more people, in more crowds, to wear more masks. A few protesters Monday were allowed into city hall to attend a council meeting, while others who tried to force their way in were pepper-sprayed by police.

Mr. Tremblay has said the new legislation strikes a balance between free expression and public safety. Only protesters "who threaten peace and public order will be targeted," he said.

The head of Montreal's police union, Yves Francoeur, has blamed the Criminal Code for his officers' lack of power to intervene, because it forces officers to prove criminal intent before making an arrest.

The new bylaw and federal legislation would change that.

Mr. Francoeur wants to reassure skeptics who fear the police will abuse any additional power they're given.

"The police use their discretion on a daily basis," he said.

"They will not issue a speeding ticket to a couple racing to the hospital to give birth, for example.

"The objective for us is to catch these trouble-makers before the situation spirals out of control, so that others, including families with children, can protest in peace and security."

The impending bylaw would also give police the power to declare any demonstration illegal if it lacks a pre-planned route, approved by the city.

That could force an end to the nightly protest marches weaving through downtown streets, seemingly at random and sometimes against traffic.

Blake Richards, the Conservative MP who proposed the new legislation, has said he had the unrest in Quebec in mind when designing the bill. He also cited last summer's Stanley Cup riot in Vancouver and the G20 protests in Toronto.

Mr. Richards says the law would be mainly preventive in nature, allowing police to step in and arrest masked participants before protests spiral out of control.

"When trouble starts, people intent on criminal activity depend on being able to 'mask up' to conceal their faces with bandanas, balaclavas or other means to avoid being identified and being held accountable for their actions," Mr. Richards said in a statement.

Some protesters have already speculated online that it will be impossible to enforce.

After all, what would police do if thousands showed up at a protest wearing masks, not unlike that final scene from the dystopian movie, "V for Vendetta", in which people converged on the British Parliament masquerading as Guy Fawkes?

Stéphane Beaulac, professor of law at the Université de Montréal, said police would have to ensure some enforcement to guarantee the law's success.

He agreed a large number of masked protesters would be hard to arrest — but he added that the criminal system works by example.

"For this to work they would have to arrest a few, bring them to court, convict them," Mr. Beaulac said.

"And hopefully that would dissuade others from wearing masks in protests."

Backbencher's bill on masked protesters gets Conservative backing
May 6, 2012 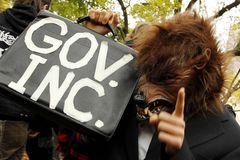 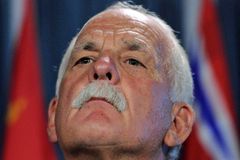 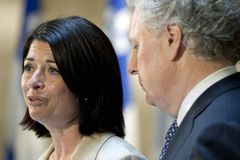 With students in streets, Charest faces tough slog with PQ in polls
May 14, 2012 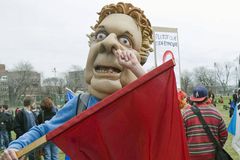