A massive new light-rail project in Montreal is shaping up as Ottawa's first test of its plan to raise billions from private investors, but Quebec is pushing for a federal commitment well before a new Canada Infrastructure Bank will be running.

This week's Quebec budget revealed for the first time how a $6-billion proposal by Quebec's pension fund, the Caisse de dépôt et placement du Québec, would be structured.

Known as the REM, the 67-kilometre-long light-rail line would connect downtown Montreal to several suburbs and the Trudeau international airport. Quebec wants construction to start this fall, with passenger service in place by the end of 2020.

The Caisse would put up $2.67-billion and assume the construction, operation and ridership risks for the project in exchange for an 8-per-cent return on its investment. If returns exceed that amount, dividends are then divided according to formulas that eventually lead to a distribution based on each party's equity stake in the project, proposed as 51 per cent for the Caisse and 24.5 per cent each for Quebec and Ottawa. Quebec is proposing that each government put forward $1.3-billion. Ottawa has not formally agreed to fund the project but has made supportive comments about it in recent days.

"Now it's a matter of whether this is a sort of thing that feeds into the bank or if it's too soon for the bank to make a decision," he said. "The thing is, this is the right idea … The Caisse is one of the major transportation infrastructure owners around the world."

It was also revealed this week that Toronto's Pearson airport is making a multibillion-dollar pitch to become a transportation megahub.

Both projects could serve as early test cases for how pension funds and private investors can help fund major new Canadian infrastructure projects.

The proposed infrastructure bank – which will have a budget of at least $35-billion over 10 years – is meant to provide a centre of expertise for governments at all levels that would offer advice on negotiating these types of major, long-term infrastructure projects.

However, the bank is unlikely to be set up in time to meet the aggressive construction schedule advocated by Quebec and the Caisse.

The federal government has not yet introduced legislation to create the bank, nor has it launched a public competition to hire the chief executive officer.

Brook Simpson, a spokesman for federal Infrastructure Minister Amarjeet Sohi, said Ottawa has the ability to approve specific projects even though its full, long-term infrastructure plan has not yet launched.

"We will be able to meet their required timelines," he said in an e-mail in relation to the REM light-rail plan.

Meanwhile, Toronto's Pearson International Airport has prepared a detailed policy paper on how a partial privatization of the airport could raise funds toward as much as $12.6-billion in new local and regional public transit that connects to the airport.

The Globe and Mail obtained a copy of the 39-page report, dated January, 2017, and marked confidential. The report has not been made public but its content was first reported Tuesday by the Toronto Star.

The transit projects near the airport could be financed in several ways, said one aviation-industry source familiar with Pearson's proposals, but the current discussions centre on some form of private investment in the airport.

"It would be more challenging for the airport to raise the funds itself, but it's not impossible," the source said.

The key to the airport's proposal is to turn the facility into a megahub – defined as an airport that serves more than 50 million passengers annually – with 20 million of them going to or coming from international destinations.

Pearson set a record last year when 44 million passengers travelled through it.

No decisions on airport privatization were announced in this month's federal budget, but officials say the government is still reviewing its options. 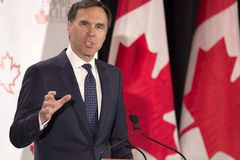 Think tank urges Liberals to sell money-making assets to private sector
March 28, 2017
Follow Bill Curry and Greg Keenan on Twitter @curryb @gregkeenanglobe
Report an error Editorial code of conduct
Due to technical reasons, we have temporarily removed commenting from our articles. We hope to have this fixed soon. Thank you for your patience. If you are looking to give feedback on our new site, please send it along to feedback@globeandmail.com. If you want to write a letter to the editor, please forward to letters@globeandmail.com.
Comments