A Montreal newspaper is asking a court to quash 24 warrants that allowed the city's police force to spy on one of its reporters, arguing the judicial orders were issued as part of an unprecedented crackdown on leaks rather than any legitimate investigation.

La Presse is arguing the police officers who requested the warrants, and the judicial officers who approved them, went further than any other law-enforcement authorities in Canadian history to find a journalist's confidential sources.

The case involves journalist and columnist Patrick Lagacé, who was the subject of several warrants this year that allowed police to see his phone records going back to 2015, to track his movements using the GPS on his iPhone and to listen in on his phone conversations.

Opinion: The role of media in our democracy deserves special protection

"In this matter, the Montreal Police Service deliberately created a complete registry of telephone communications by a reporter who was not under investigation, giving itself the means to identify all of the confidential sources that he contacted over a period of many months," La Presse said in its request for judicial review, which was tabled in Quebec Superior Court on Monday.

"It appears from an analysis of the documents that these investigative techniques were not justified, nor useful to obtain progress on the real investigation under way," the document added.

Media organizations including The Globe and Mail have gone to court to obtain the release of the warrants in this case, which began as an investigation of a police officer. Information from the documents is covered by a publication ban until at least Jan. 4.

The Montreal Police Service's internal affairs launched an investigation in late 2015 into allegations that officer Fayçal Djelidi, a 16-year veteran of the force, falsified information in police reports. Mr. Djelidi was charged last July with perjury, obstructing justice and breach of trust, as well as soliciting and obtaining sexual services.

During the investigation, the Montreal Police Service discovered Mr. Djelidi had phone communications with Mr. Lagacé in 2015 and early 2016.

The investigators cited the fact that there had been a number of leaks from the Montreal Police Service in early January of this year in their application to obtain the first warrant to sift through Mr. Lagacé's phone records, which they got on Jan. 19.

However, La Presse says in its court filing, the biggest stories emanating from leaks were on television network TVA. "None of these stories were written by Patrick Lagacé," La Presse said.

The media company argues that, for this reason, there was no legal rationale to support the warrants, especially because the contacts between Mr. Lagacé and Mr. Djelidi were not criminal in nature.

"To the knowledge of the applicants, no police officer or civil servant has ever been found guilty of breach of trust for transmitting information to members of the media," La Presse said.

According to La Presse, it was not necessary to go through Mr. Lagacé's phone records except as an attempt to stop leaks of embarrassing information to journalists.

In its court filing, La Presse asks the Superior Court to find that the warrants violated Mr. Lagacé's constitutional rights and to order the destruction of all of the records the Montreal Police Service seized.

When the controversy erupted over the warrants in the fall, Montreal police Chief Philippe Pichet said his force acted legally to get the warrants.

They were granted by Josée De Carufel, a justice of the peace in Montreal who was nominated in 2012 after working as a criminal prosecutor since 2003.

"The City of Montreal Police Force recognizes freedom of the press," Chief Pichet said. "But on the other hand, there were criminal allegations against a police officer … and we have a job to do." 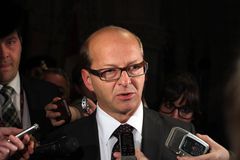