Finance Minister Bill Morneau's $1,500-per-ticket fundraiser with an elite group of Halifax business people is part of a trend for the governing Liberals to fill party coffers by offering exclusive access to senior cabinet ministers.

The Globe and Mail found at least 20 fundraising events this year that offer donors private time with senior ministers who have enormous authority over spending and policy decisions.

Politics Insider (subscribers only): Trudeau's new era of transparency off to an iffy start

When the Liberals swept to power last year, Mr. Trudeau laid down tough new rules for his ministers in matters involving lobbying and fundraising. Asked on Wednesday about a Globe story on the Oct. 13 Morneau fundraiser, Mr. Trudeau would not acknowledge whether it broke those rules.

"The federal level has the most stringent election financing rules among provinces and jurisdictions in Canada," Mr. Trudeau said in the House of Commons. "Canadians expect us to follow all of those rules, and that is exactly what we have done."

The style of fundraising known as cash-for-access has been controversial this year at the provincial level. Ontario Premier Kathleen Wynne unveiled campaign finance reforms after The Globe revealed corporations and lobbyists paid thousands of dollars for exclusive access to Ms. Wynne and members of her cabinet. B.C. Premier Christy Clark faced complaints for attending similar events.

The federal Finance Minister will also be the "Special Guest" at a Nov. 7 Liberal fundraiser at the exclusive Windsor Arms Condos in Toronto, and would-be attendees are being asked to pay $500 for a ticket. The location is the 5,000-square-foot home of philanthropist Nancy Pencer.

On Oct. 28, Mr. Bains is the headline attraction for a fundraiser at a private residence in Kleinburg, Ont. Tickets run as high as $400.

Later this week, Ms. Joly is the main draw at a Montreal fundraiser for which tickets are also up to $400.

The federal "Open and Accountable Government" rules state that "there should be no preferential access to government, or appearance of preferential access, accorded to individuals or organizations because they have made financial contributions to politicians and political parties."

Opposition parties on Wednesday called the event at which Mr. Morneau met business executives at the home of a Halifax mining tycoon a clear breach of those rules. About 15 business executives, including land developers, bankers and mortgage brokers, paid $1,500 to glad-hand with Mr. Morneau at the mansion of Fred George, a mining and property developer.

"When it comes to getting the ear of the person overseeing billions of dollars in public spending, that is quite a bargain," NDP Leader Tom Muclair told the House. "The Prime Minister knows that this sort of cash-for-access fundraising is wrong, so the question is: Why does the Prime Minister continue to allow it and when will they repay the money?"

Mr. Morneau suggested to the Commons the Halifax fundraiser was part of his "consultation process for our budget that allows us to listen to Canadians." He stressed that he is also taking input from tens of thousands of people across Canada.

"Like all members in this House, I am engaged in fundraising activities in support of my party. The Oct. 13 event in question was organized by the Liberal Party of Canada and we followed all of the applicable rules," the Finance Minister said.

Mr. Morneau also avoided answering the opposition on what was discussed at the Halifax fundraiser. One of the attendees was property developer Jim Spatz, who was recently appointed as director of the Halifax Port Authority.

"There is no question that when you hold a meeting like that for millionaires and it is the highest possible donation that is required to get into the room, the public has a right to know what gets discussed in these types of events," Mr. Mulcair told reporters.

A Liberal Party spokesman declined to provide a list of all fundraisers at which Trudeau ministers were the main attraction, saying any donations over $200 are later disclosed through Elections Canada. 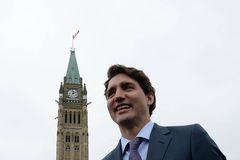