Ethics Commissioner Mary Dawson, speaking publicly for the first time on Finance Minister Bill Morneau's conflict-of-interest controversy, is making it clear she didn't advise the former executive against establishing a blind trust for his substantial wealth.

The federal watchdog said she merely told Mr. Morneau that it was not necessary to set up a blind trust that would place his wealth beyond his reach while he served in public office.

Prime Minister Justin Trudeau, by comparison, put his family fortune in a blind trust years ago to avoid accusations of conflict of interest and just last month the Liberal Leader described this mechanism as something "normally only asked of ministers and prime ministers."

Margaret Wente: Tax reforms, blind trusts and the 1 per cent: How it all went wrong for Bill Morneau

The Trudeau government, responding to controversy over the lack of blind trust for Mr. Morneau, has repeatedly cited Ms. Dawson as the architect of existing arrangements.

As Mr. Trudeau told reporters earlier this week, "the Finance Minister followed exactly every recommendation that the conflict of interest and ethics commissioner made to him."

Ms. Dawson, however, told journalists Tuesday that she did not advise Mr. Morneau not to put his holdings in a blind trust.

"I said it wasn't required," she said.

These comments indicate that Ms. Dawson left it to Mr. Morneau to decide whether to set up a blind trust.

The former Bay Street business leader's holdings include a family trust – the contents of which are not public.

In addition, according to corporate disclosure records accurate until the fall of 2015, around the time he became a cabinet minister, Mr. Morneau owned more than two million shares of Morneau Shepell, the publicly traded pension and human resources company he previously helmed.

The Finance Minister has repeatedly declined to say what he did with these shares, even as he faces allegations that he is in a conflict of interest for sponsoring C-27, a bill to change pension rules in a manner that opposition parties say could reasonably be expected to benefit Morneau Shepell.

The Ethics Commissioner nevertheless offered some insight into the way she interprets Canada's conflict-of-interest law, allowing Mr. Morneau to keep his shares.

In a statement provided to The Globe and Mail, her office said the divestment requirement "does not apply to any controlled assets that reporting public office holders hold indirectly, through a holding company or other similar mechanism."

Ms. Dawson told CTV later Tuesday that she has previously made recommendations to reform conflict-of-interest law so that even assets held indirectly would be subject to divestment rules. The government did not act on them.

This company is listed on Mr. Morneau's disclosure statement filed with Ms. Dawson's office, where the Finance Minister says he is sole owner of 2070689 Ontario Ltd., a Toronto-based holding company, which also owns much of 1193536 Alberta Ltd. Nancy McCain, his spouse, is president of the Toronto company and a director of the Alberta firm.

Mr. Morneau's filings disclose that his wife earns "dividends, interest and capital gains" through this Alberta company. If he still owns the two million-plus shares, those dividends would exceed $1.6-million a year.

In the Commons, NDP ethics critic Nathan Cullen called Mr. Morneau's sponsorship of Bill C-27 possibly "the most blatant conflict of interest in modern Canadian history," saying this bill would significantly benefit Morneau Shepell and its shareholders, which may include the Finance Minister, who has not been required to divest any of his holdings into a blind trust. "What is worse, this massive troubling conflict of interest, or the fact that Liberals do not seem to think there is a problem in the first place?" Mr. Cullen asked.

On Tuesday, Mr. Morneau released a letter he wrote to Ms. Dawson asking for another meeting with her to discuss his financial holdings and recommendations on how he should be best arranging them to avoid conflicts of interest.

"As you know, these recommendations have recently been the subject of increased public scrutiny, and I am writing to seek further guidance in this matter," the minister told Ms. Dawson.

"I would ask that we meet again to discuss the guidance you have provided and the assets, holdings and disclosures I have."

He said he would be willing to set up a blind trust should the Ethics Commissioner ever recommend that.

"As a result of this discussion, should you determine that additional measures – such as a blind trust – would be an appropriate course of action, I would be pleased and eager to move forward on any revised recommendations you might provide."

The Conservatives called Tuesday for Mr. Morneau to publicly divulge everything he submitted to the Ethics Commissioner for her review.

Conservative MP Lisa Raitt, deputy leader of the Official Opposition, said she does not believe a federal politician should be able to avoid having to place assets in a blind trust because they are held indirectly through a corporation.

"I hope the minister is not using a holding corporation to avoid his responsibility of placing his assets in a blind trust. This would be the very thing he accuses small businesses of doing – setting up a corporation to avoid paying their fair share of taxes," Ms. Raitt said.

With reports from Gloria Galloway

Trudeau comes to Morneau’s defence over lack of blind trust for assets
October 16, 2017 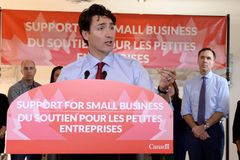 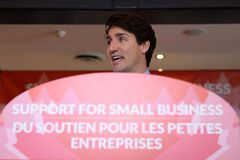 Opinion
Tax reforms, blind trusts and the 1 per cent: How it all went wrong for Bill Morneau
October 16, 2017 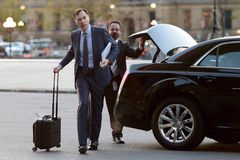