Three out of four opposition parties in the House of Commons say they favour a return to a per-vote subsidy amid recent controversy over Liberal cash-for-access fundraising events.

The Conservatives, who killed the government-funded subsidy when they were in power, do not want to see its return. But the New Democrats, the Bloc Québécois and the Greens all argue that it was an equitable and ethical mechanism for ensuring that political parties have the money they need to conduct research, to communicate with potential voters and to pay for election campaigns.

"They should absolutely bring it back. It was the fairest of all the ways in which political parties received public support," Green Party Leader Elizabeth May said. It was funding that was not tied to political interests, she said, and "the more public funding you have, the less you should have any excuse at all for fundraising at, for instance, cash-for-access events."

Justin Trudeau has been under fire in the Commons for weeks over Liberal Party soirées with well-heeled donors, including wealthy Chinese investors, who pay up to $1,500 a ticket (approximately the maximum that a person can legally contribute to a political party in Canada in a calendar year) for access to the Prime Minister and senior members of cabinet.

Maryam Monsef, the Minister of Democratic Institutions, did not return requests for comment about any interest there might be in reinstating the subsidy that was introduced in 2004 by former Liberal prime minister Jean Chrétien after he banned political donations from corporations and unions. Ranging from $1.75 to $2 a vote, it paid out a combined total of just under $30-million to the five largest federal parties in 2011, the year before it was gradually reduced and then eliminated.

Its loss means all parties have had to turn their fundraising machines to high gear.

The Conservatives, and more recently the Liberals, have been relatively efficient at bringing in significant cash from individual donors. Parties that are neither in government nor poised to win the next election have had less success.

"It's easy to raise money when you are in power," said Louis Plamondon, the chair of the Bloc, whose caucus has introduced a bill to restore an annual per-vote subsidy of $1.50 and cut the maximum individual political contribution to $500 a year.

"That would eliminate the $1,500 cocktails," Mr. Plamondon said. "I have told Liberal MPs if you want to stop these scandals, return to the Chrétien law."

The Bloc MP pointed out that political donors are anticipated to receive about $30-million in tax credits in 2017. People who donate up to $400 are given 75 per cent of that money back as a credit, with the amount gradually declining as the donation approaches the annual maximum.

Mr. Plamondon argues that the federal money used to pay for the subsidy could be recouped, in part, by paying out less in tax credits.

Robert Fox, the national director of the New Democrats, says his party would also welcome the return of the per-vote subsidy.

"What we see is that the pressure on political parties to raise funding in the absence of a per-vote subsidy further distorts our relationship with our members, the public and other actors," said Mr. Fox.

The Conservatives, meanwhile, stand by their decision to eliminate the subsidy despite the cash-for-access fundraising techniques being employed by their successors.

Cash-for-access "could be stopped by simply following the Prime Minister's own ethical guidelines. So that's where we should be going," said Scott Reid, the Tory critic for Democratic Institutions.

The per-vote subsidy is problematic for a number of reasons, said Mr. Reid.

First, he said, it directs money to the party that Canadians supported in the most recent election, but voters can change their minds between trips to the polls. To say someone must continue subsidizing a party they no longer support "just doesn't make sense," said Mr. Reid, "whereas having the money follow where you are giving your donation currently seems reasonable to me."

Second, he said, the subsidy favours the party in power. "You are always giving more money to an incumbent party, it's unavoidable, under a per-vote subsidy," said Mr. Reid. "That increases their chance of winning the next election and indeed winning and getting a larger percentage of the vote than they did the time before."

And finally, he said, the per-vote subsidy costs a lot of money.

But Jean-Pierre Kingsley, the former chief electoral officer, said he has always argued that the subsidy should be maintained.

It provides political parties with a steady source of revenue in between elections that allows them to do a better job of analyzing policy, said Mr. Kingsley.

In addition, he said, it gives funding to parties that appeal to less-well-off Canadians. "We know very well that the disadvantaged don't show up at the polls," said Mr. Kingsley, "and they certainly don't have any money to give to political parties and we need to have people intercede on their behalf, beyond what the more mainstream parties may wish."

Canadians have said they want party financing controlled by political standards, said Mr. Kingsley, "and by reintroducing the per-vote subsidy, one could be achieving that." 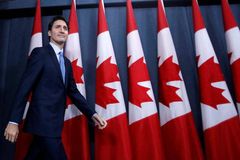 Can Trudeau find a self-interest angle in fundraising reform?
December 18, 2016
Follow Gloria Galloway on Twitter @glorgal
Report an error Editorial code of conduct
Due to technical reasons, we have temporarily removed commenting from our articles. We hope to have this fixed soon. Thank you for your patience. If you are looking to give feedback on our new site, please send it along to feedback@globeandmail.com. If you want to write a letter to the editor, please forward to letters@globeandmail.com.
Comments