Democratic Reform Minister Maryam Monsef, whom the Liberals have championed as this country's first Afghan-born MP, says she was actually born and lived most of her early life in Iran before arriving with her mother and two younger sisters in Canada as refugees.

This revelation contradicts a key narrative that Ms. Monsef has built ever since she entered public life as a local politician in Peterborough, Ont., and when she ran for Parliament in the 2015 election. When U.S. President Barack Obama was in Ottawa in June, he highlighted her Afghan roots in an address to Parliament.

Ms. Monsef says she only learned about her Iranian birthplace last Thursday when approached by The Globe and Mail, which had been making inquiries about how she came to Canada in 1996 when she was age 11.

The Prime Minister's Office said it had no idea that such a fundamental feature of Ms. Monsef's life story was wrong. Officials scrambled to put together a detailed timeline of her family's life in Iran and Afghanistan and the journey to Canada.

When asked why security vetting for cabinet posts didn't uncover this error, an official said "we learned of this information about Maryam Monsef's place of birth when it was brought to us recently by the The Globe and Mail."

Ms. Monsef, the youngest of Mr. Trudeau's cabinet ministers at age 31, said in an interview that it was a complete shock to discover that she was born at the Imam Reza hospital in Mashhad, Iran, a city with a large Afghan population.

"In the last few days, my neat and tidy refugee story has proven to be a bit more complicated than I originally thought. [The Globe's] inquiry led me to have a conversation with my mom and I have since found, while I am still an Afghan citizen, I was born in a hospital in Iran," she said.

She said her mother, Soriya Basir, never felt it was important to tell Ms. Monsef and her sisters Mehrangiz and Mina that they were not born in Afghanistan.

"For her, it didn't matter because in our culture, it's who your parents are who determine your nationality, and by law, legally, even though I was born in Iran, that doesn't change my Afghan citizenship. So for her, it wasn't relevant," Ms. Monsef said.

For years, Ms. Monsef's mother allowed her daughter to misrepresent her birthplace as she built a political base in Peterborough, including a failed run for mayor in 2014 and her successful win in last year's general election. Her mother was in the House of Commons in January when Ms. Monsef delivered her maiden speech in which she spoke about being born in "a place at war, where human rights were not respected, where educating women was not allowed."

Ms. Monsef said her mother is "now sorry" that she never told her three daughters the truth.

She said the news has also "been hard" on her sisters but they have urged her not to let it distract from her work as cabinet minister and MP.

As angry as she was with her mother, Ms. Monsef said she ended up finding out exactly what happened to her father, Abdul Samad Monsefzadeh, a trader in car parts who was killed between the Afghan-Iran border in January, 1988 in a raid by either bandits or Soviet troops.

"Because I have been asking my mom many more questions in recent days than I have past, she revealed to us what happened. … He actually got away and he went back to save his cousin. He went back and that's how he was killed. He didn't need to go back," she said.

Ms. Monsef has since discovered that she and her sisters spent less than three years in Herat, Afghanistan, where her parents had lived before moving to Iran. The girls lived there for four months in late 1987 and early 1988 and for 2 1/2 years from 1993 to 1996. Herat fell to the Taliban in September 1995, which prompted her mother to try to get to Canada, where she has other family members.

Ms. Monsef said other elements of her family's story remain true. They fled the Taliban in Herat back to Mashhad and then travelled by donkey to Islamabad, Pakistan. The family then travelled to Karachi where they flew to Jordan and then to Montreal, where they claimed refugee status.

As angry as she was at her mom, Ms. Monsef's eyes teared up when she spoke about how her mother made the decision to leave Herat to protect her young daughters. Several Afghan men had asked to marry Ms. Monsef, then age 10.

Here is the Peterborough-Kawartha MP in her own words on her upbringing and journey, as she has relayed it in several past interviews.

On the 1982 wedding of her mother to her father in Herat, against the backdrop of the then-recent Soviet invasion:

"She gets married to her Prince Charming. Every day they are together, they fall more and more in love." (CPAC, 2015)

Question: "So you were born in Afghanistan, correct?"

(CTV Question Period with The Globe and Mail's Robert Fife, 2016)

On the fallout for her family from her trader father's death at the Iran-Afghanistan border in 1988:

"He is caught in a crossfire across the border and he's killed.

"She's 23, left with three baby girls to look after and no way to support herself. She tries teaching, but then the Taliban come and she can't teach any more and as a widow she has no status in that country." (CPAC, 2015)

On her widowed mother struggling to raise three girls, on both sides of the Afghanistan-Iran border:

"Despite her brilliance and training as a teacher, she was not allowed to work in either Afghanistan or Iran: The Taliban had this thing against working women and educated girls. Iran continues to have this thing about permitting any Afghan refugee to work, period." (Personal essay in online site PTBO Canada, 2012) 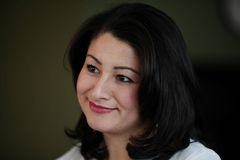