There have long been obstacles in the path of women seeking to succeed in politics – and some female MPs are now coming forward to share their own experiences with sexually inappropriate behaviour, both on and off Parliament Hill.

The Canadian Press surveyed current female MPs of every political stripe last month to find out the extent to which they had been the targets of sexual harassment, assault or misconduct of all kinds, including during their time in elected office.

Trudeau urges Canadians to speak up about sexual harassment

The responses make clear that political Ottawa – long a bastion of male-dominated power relationships – is no stranger to inappropriate behaviour against women, no matter their stature, with social media being the most common source of complaints.

Of 89 current female members of Parliament, 38 chose to respond to the voluntary survey, which sought their input on everything from lived experiences to their views on the global conversation growing out of allegations against Hollywood producer Harvey Weinstein, among others. Anonymity was promised to ensure MPs could share their experiences and opinions without fear of reprisal.

Nearly 58 per cent of respondents said they had personally been the target of one or more forms of sexual misconduct while in office, including inappropriate or unwanted remarks, gestures or text messages of a sexual nature.

Nearly half of respondents – 47 per cent – said they were subjected to inappropriate comments on social media.

"It's particularly good moment for us to show leadership, to take advantage of the spotlight that we have on Parliament Hill, to affirm that sexual harassment can happen in any workplace, not only on the Hollywood casting couches," said New Democrat MP Sheila Malcolmson, who said she opted to speak publicly out of a sense of responsibility.

Some of the behaviour documented by the survey appears to have been at the hands of those within the corridors of power.

Twenty-two MPs who said they had personally experienced some form of sexual misconduct in office chose to answer a question about the perpetrators, with five saying it came from an MP from her own party. Ten said it came from an MP in a different political party.

Eight respondents said the perpetrator was a lobbyist, constituent or other stakeholder known to them through their role in elected politics, while 18 said it was either someone from outside the world of politics or someone who is anonymous or otherwise unknown to them.

One MP, speaking on condition of anonymity to protect her personal privacy, said that while she has never experienced sexual harassment on Parliament Hill, she has heard her male colleagues share many jokes and remarks of a sexual nature about female MPs and employees.

Despite her best efforts to make clear that the jokes – which her colleagues find trivial – are unwelcome and inappropriate, they have not stopped.

The MPs surveyed were nonetheless hesitant to suggest they are worse off than anyone else.

Sixty-three per cent of respondents said they don't believe the level of sexual harassment in political circles is any different than any other workplace.

"I sincerely think it's not any different than anywhere else," said Quebec Liberal MP Alexandra Mendes. "I think it's part of something that is deeply in the male mentality, this sort of undermining of women's capabilities and talents and always sexualizing just about everything."

One MP recalled a voter slipping his hand onto her buttocks when they posed for a photo together during the 2015 federal election campaign.

"I remember the discomfort of having to push his hand away after," she said, but decided to stay silent.

"What does one do with that? Tell him he's disgusting and that it's nauseating?" she said, noting she was on the campaign trail.

There was a higher number of MPs who said they had either witnessed, or been told about, sexual misconduct targeting another woman in their entourage, be it a staffer, page, intern, House of Commons employee or MP.

Two-thirds of respondents said such behaviour had occurred rarely, while another four said it happened often.

The vast majority said they had never heard about the same things happening to a man, although six respondents did say they had either witnessed or been told about sexual misconduct directed at men in their entourage. They described the instances as rare.

Diane Lebouthillier, the minister for national revenue, said in an interview that she encouraged two young female staffers to file a complaint after she noticed their discomfort with someone in a position of authority.

The House of Commons would not confirm whether it received the complaint.

Lebouthillier, who would not divulge further details, said she told the staffers to add her own name to the complaint and later, they told her they would not have done it without her encouragement, because they did not want to cause her any embarrassment.

She said she told them not to think like that.

"The best friend of violence is silence, so if someone ever says, 'You're going to embarrass me,' that person is not there to help you," she said.

– With files from Mylene Crete and Kristy Kirkup. 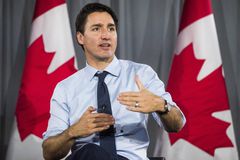 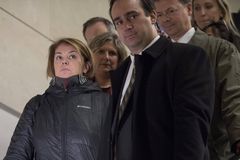