The train derailment and explosion in a Quebec town is an "unimaginable disaster" that left the area looking like a "war zone," Prime Minister Stephen Harper said at a news conference Sunday.

"It's a beautiful downtown here that's been destroyed. There really is going to be need for substantial reconstruction," he said.

A driverless 73-car Montreal, Maine & Atlantic Railway train carrying crude oil sped into the eastern Quebec town of 6,000 early Saturday, before derailing, exploding and spreading fire. Five people are confirmed dead and more fatalities are expected among the 40 others who remain missing.

Mr. Harper said he did not yet have all the facts about the disaster, but the information he's seen "is very, very concerning."

He was more explicit when speaking in French, however: "The things that I have heard are very worrisome. It is hard to imagine that we could have such an accident. We have regulations to prevent these kinds of things. But there will be investigations that will determine who is guilty, who is responsible."

Mr. Harper said an investigation has been launched by the Transportation Safety Board.

Federal NDP Leader Thomas Mulcair said Sunday the owners of the runaway train should have given "a more active response" when the tragedy occured.

The mayor of Lac-Mégantic criticized the company on Saturday for not speaking to her about the tragedy. Other officials have noted the slow response from the firm, which has focused on defending itself and not offering help.

"Your first obligation should be to help out," Mr. Mulcair said of the company. "A more active response would have been expected."

"There has been an important increase in the quantity of the petroleum products being transported by rail all over Canada," he said.

"The question is, with this important increase, has the ability to regulate followed suit? And that is exactly the type of question the public is asking us today: How can something like this happen in Canada?"

Alberta Premier Alison Redford said she's also anxious to learn the cause of the derailment and explosion "because we want to make sure that if there is going to continue to be transportation of resources – which we think there has to be – that it's done in the safest way possible."

"Probably for us here in Alberta, we're even more sensitive to it because we've gone through so much trauma," she said at her annual Stampede pancake breakfast Sunday morning – this year held nearby the flood-devastated town of High River.

Federal Liberal Leader Justin Trudeau said it's too early to talk about what the disaster means for the future of transporting oil by rail.

"I think there's going to be lots of time to talk about that, lots of questions about how this happened. Now is not the time to do that," Mr. Trudeau said.

"Now is the time to support and to help a beautiful small town through a very difficult situation."

The president and CEO of Rail World Inc., the parent company of Montreal, Maine & Atlantic Railway, said the train was parked uphill of Lac-Mégantic before it became loose and began careening downhill into town.

Mr. Burkhardt, who indicated he was mystified by the disaster, said the train was parked because the engineer had finished his run.

"We've had a very good safety record for these 10 years," he said of the decade-old railroad. "Well, I think we've blown it here."

Former Quebec premier Jean Charest said Lac-Mégantic is a beautiful, tight-knit community, close to the village of Bury, where his mother was born.

"It will be a very big challenge for them to be able to rebuild. These communities are very interesting because they haven't really changed a lot in the last 50 years," Mr. Charest said.

"The connection to Maine is very important. This rail line goes through the state of Maine, and is fairly important for Eastern Canada, for transportation."

Christian Paradis, a federal cabinet minister and the local MP, had lunch on Friday at the Musi-Café, the popular bar where dozens of people were partying when the derailment occurred and who are feared dead. "This is a huge hit for the city. We are going to need to pull together, roll up our sleeves and rebuild," he said.

Mr. Paradis is from the nearby Eastern Townships town of Thetford. He came back early Saturday and met people who were crying for lost relatives. "People are just trying to understand what happened." 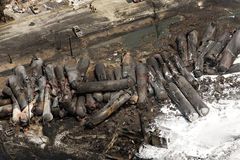 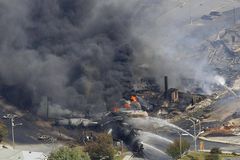 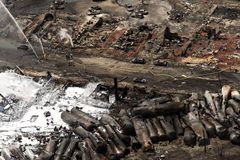 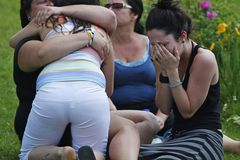 Follow Sophie Cousineau and Kelly Cryderman,  on Twitter @S_Cousineau @KellyCryderman
Report an error Editorial code of conduct
Due to technical reasons, we have temporarily removed commenting from our articles. We hope to have this fixed soon. Thank you for your patience. If you are looking to give feedback on our new site, please send it along to feedback@globeandmail.com. If you want to write a letter to the editor, please forward to letters@globeandmail.com.
Comments