Tom Mulcair is clearing the air on pot, clarifying that he doesn't believe anyone should go to jail for possessing a couple of joints.

The freshly minted NDP leader created confusion about his party's position recently when he said decriminalization of marijuana would be a mistake.

But it appears he was actually referring to outright legalization of marijuana.

"But be very clear that Thomas Mulcair does not believe that anyone should be going to jail for possession of just a small amount of pot. Criminalization is not the answer for any area of social policy."

"No," Mr. Mulcair said then. "I think that would be a mistake because the information that we have right now is that the marijuana that's on the market is extremely potent and can actually cause mental illness."

The comment appeared to be a reversal of the NDP's long-standing support for decriminalization.

It came back to haunt Mr. Mulcair on Friday, the annual April 20 counterculture "pot holiday," as Liberals attempted to turn marijuana into a defining issue in the battle for centre-left young voters.

Young Liberals plastered Mr. Mulcair's quote on handouts and posters to be circulated at pro-pot rallies in Ottawa, Toronto and Vancouver. They were also to distribute buttons promoting the Liberal party's new policy in favour of legalization – a position adopted at the party's convention in January.

"This is the new NDP and we are going to tell people about it," said Young Liberal president Samuel Lavoie.

"Mr. Mulcair would continue to punish pot smokers, would continue the Harper war on drugs – a war even Mr. (Prime Minister Stephen) Harper now admits is 'not working.' ... Only the Liberal party will take Canada in a new direction and end Mr. Harper's failed war on drugs."

Alyx Holland, national director of the Young Liberals, dismissed Mr. Soule's clarification, saying support for decriminalization is not reflected in Mr. Mulcair's comments to Global TV. She acknowledged that Liberals see potential for turning marijuana into a wedge issue that will benefit her party among youth voters.

Meanwhile, an aromatic haze floated over the front lawns of Parliament Hill and provincial legislatures as pot lovers openly defied the law, in plain view of the police.

At Manitoba's legislature, hundreds of people gathered, many openly smoking marijuana. Police expected more than 1,000 by day's end. Many hot-dog cart owners were in place before 9 a.m. to secure a spot near the hungry crowd.

About a dozen police officers stood by and watched for trouble, but police had no plans to make any arrests for toking.

"While it's a behaviour that we do not condone and we do not support, at this time that's not something that we will be following through with charges. However, we are here, we are in full force if there's any type of acts of violence, if there's any property damage."

Police were also keeping an eye on those who left the area by car for signs of drug impairment, Const. Aitken said.

RCMP said up to 5,000 people turned out for the hour-long rally on Parliament Hill, which ended peacefully.

"There's nothing wrong with smoking weed," said Ottawa protester Austin Hazell. "I just hang out at home, just kick it, you know.

Similar so-called "4/20" rallies were held across North America on Friday.

The number 420 has been associated with marijuana use for decades, though its origins are murky. Its use as code for marijuana spread among California pot users in the 1960s, and spread among followers of the Grateful Dead.

In Canada, the NDP was the first national party to support decriminalization, a position eventually adopted by the Liberal government of Jean Chrétien. His government actually introduced a bill to remove criminal penalties for possession of small amounts of marijuana but it was not passed before the Liberals were defeated by Stephen Harper's Conservatives.

Mr. Harper has gone in the opposite direction, imposing mandatory minimum sentences for possession of as few as six pot plants. And although he last week admitted the war on drugs hasn't worked, Mr. Harper has categorically rejected decriminalization or legalization as solutions to the problem.

He said Mr. Mulcair also advocates creating a royal commission, "bringing together the best social, medical and law enforcement expertise" to recommend the best solutions for the future.

Mr. Soule noted that the last time Canada conducted an in-depth study of the recreational use of drugs was 40 years ago, with the LeDain commission.

With files from Steve Lambert, Winnipeg; Laura Beaulne-Stuebing, Ottawa; and The Associated Press. 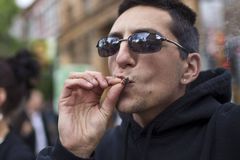