Tom Mulcair says he is willing to work with Liberal Leader Justin Trudeau to form a government – and has even written that pledge into his platform – but he could never support Stephen Harper, and says his "No. 1 job" is to oust the Conservatives from office.

The NDP Leader has never been a fan of Mr. Harper's brand of politics. But their divergence on matters of reasonable accommodation – especially when it comes to Muslims – has sent the New Democrats plummeting from first to third in what had been a tight three-way race.

Mr. Mulcair is angry that religious and racial diversity has become an election issue, and he blames Mr. Harper. "The country that I love is in really serious danger if we give this guy another four years," he told The Globe and Mail on Friday.

As the election campaign enters its final stretch, polls suggest Canadians will elect a minority government. That will require one party to seek the co-operation of at least one other to obtain a mandate to govern.

"There is one guy I won't work with and that is Stephen Harper," Mr. Mulcair said after his party released its full 72-page campaign platform. "Economically and environmentally and socially, that's always been clear. Now, with his gruesome behaviour on race in this election campaign, I want nothing to do with his ilk."

The New Democrats are so eager to stress their co-operative nature, they say in their platform document that they would "work with other federalist parties through informal or appropriate stable arrangements to end Stephen Harper's lost decade."

That means working with Mr. Trudeau, whose party is currently topping the polls and who said in April he would be more open to forming a coalition with New Democrats if Mr. Mulcair was not running the party.

Mr. Trudeau "grabbed the door and he slammed the door" on co-operation, Mr. Mulcair said. But, he said, he is willing to get beyond the personality issues with the Liberal Leader because "I know that my No. 1 job is to get rid of Stephen Harper. And I will work with other like-minded people who know that we can build a better Canada."

The NDP campaign was essentially knee-capped by a niqab. Mr. Mulcair's defence of an Ontario woman who successfully challenged the government's refusal to allow her to wear the Muslim face covering as she swore her oath of Canadian citizenship caused his support to plummet in the NDP stronghold of Quebec.

Now, the New Democrats have a big mountain to climb in nine short days if they are to get back into the race before voting day.

Mr. Mulcair's strategy over the past week has been to suggest that Mr. Trudeau and Mr. Harper are cut from the same cloth – that the Liberal Leader's policies are merely those of the Conservatives being uttered by someone with more charisma and less political experience.

Now, the two parties differ on the Trans-Pacific Partnership, the international trade deal signed last weekend by the Conservative government. Mr. Trudeau says he would consult with Parliament and the provinces before ratifying the agreement. Mr. Mulcair has rejected it outright, saying it would cost tens of thousands of jobs, make pharmaceuticals more expensive and put Canadians' privacy at risk.

NDP officials say the trade deal is the wedge issue they have been looking for to bring the voters they lost over the niqab, and others, back into their fold.

There are many sectors of the economy that have approved of the deal – the beef producers, the canola producers and the cranberry producers, to name a few. Even the dairy farmers, whose livelihoods Mr. Mulcair had sought to defend with his opposition, say they can live with it. But auto industry jobs are at risk.

So, standing against the deal did not require a complicated analysis, he said. "It was just a good, honest, personal reflex. My dad lost his job when I was 18. I was still a teenager, I was heading to law school, and there were eight other brothers and sisters at home. I had one other sister who was working as a nurse. She used to lend me money to buy my books. That's who I am."

The most recent example of the Conservatives' divisive policy, Mr. Mulcair said, was the revelation, first reported in The Globe and Mail, that the Prime Minister's Office directed Canadian immigration officials to stop processing one of the most vulnerable classes of Syrian refugees in the spring and declared that all UN-referred refugees would require approval from the PMO.

Mr. Mulcair said his own family arrived in Quebec from Ireland at the height of the potato famine.

"Quebeckers, in a time of need, threw open their doors and let people in, the neediest on Earth. About 10 per cent of the entire population of Quebec City died from the ship-borne diseases," he said. "And yet, people kept going down to the docks because these were the poorest and hungriest and neediest on Earth. That's the Canada I want to get back to." 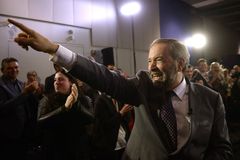