A federal government run by New Democrats would immediately bring Canadian troops home from Syria and Iraq, ending this country's role in the U.S.-led mission against the Islamic State months before its military commitment expires, party leader Thomas Mulcair says.

The pledge sets Mr. Mulcair and the NDP apart from both the Conservatives and the Liberals, who say Canada must continue to play a part in the fight against the radical Sunni Islamist group, also known as ISIS or ISIL, which has shocked the world with its brutality.

Mr. Mulcair has been consistent in his determination to withdraw the roughly 600 Canadian soldiers who are taking part in an air war against the jihadists in Iraq and Syria, as well as 69 members of Canada's special forces who are training Kurdish fighters. While campaigning in Winnipeg on Thursday, he clarified that the return would happen as soon as an NDP government takes office, even though Canada has said it will stay until March of next year.

When asked how he would explain the early departure to Canada's allies, Mr. Mulcair said the fight against Islamic State is not being waged under the auspices of a multilateral organization like the United Nations or NATO, and that means this country may go its own way.

"This in an American-led mission," he said. "Canada is free, we have our own foreign policy, we will have an independent foreign policy under an NDP government, and we will put an end to Canada's participation in the combat mission in Iraq and in Syria."

Mr. Mulcair also said an NDP government would leave in place the 200 members of Canada's Armed Forces who have been sent to train Ukraine's military in the fight against Russian-backed rebels. Ukraine "is a completely different situation," he said. "I think that the training mission in Ukraine could and should be able to continue."

The U.S. battle against Islamic State began in Iraq a year ago, and Canada joined in last October, initially agreeing to a six-month mission. That commitment was renewed for one year, starting in March. The fight has been expanded to Syria, where Canadian CF-18s are bombing IS positions.

Mr. Harper has dismissed the NDP's position against the military mission as deeply ideological, deeply wrong, and out of step with what Canadians believe. When the Syrian refugee crisis became an election issue last week, the Conservative Leader said the strikes against the Islamic State are imperative to address the "root cause" of the exodus and to prevent the group from becoming an established security threat to the world.

Liberal Party Leader Justin Trudeau, who has voiced opposition to the air-strike campaign in Syria, accused the NDP Leader and the Conservative Leader of adopting extreme approaches to the role of Canada's military in Iraq and Syria.

"We know that there is a role for military engagement in the fight against the terrible terrorists that are ISIS, but we also know that there is a real need for Canada to do more in addressing the humanitarian catastrophe befalling so many in that region," said Mr. Trudeau, who was campaigning in Vancouver on Thursday. "That's why we continue to be committed to both engaging militarily in a training mission to help local troops help bring the fight directly to ISIS and, at the same time, do much more on welcoming refugees and standing up for humanitarian support." 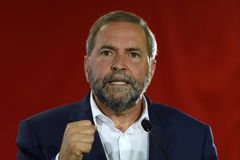 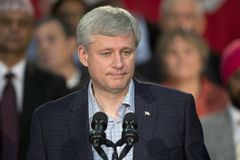 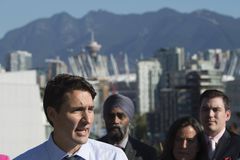