Commissioner Jeffrey Oliphant has concluded that the 1993 and 1994 cash dealings between former prime minister Brian Mulroney and German-Canadian business Karlheinz Schreiber were "inappropriate."

In a stern report released Monday at 1 p.m., Mr. Oliphant criticized Mr. Mulroney's previous testimony in a civil lawsuit against the federal government, as well as his handling of the payments from Mr. Schreiber.

"The conduct exhibited by Mr. Mulroney in accepting cash-stuffed envelopes from Mr. Schreiber on three separate occasions, failing to record the fact of the cash payments, failing to deposit the cash into a bank or other financial institution, and failing to disclose the fact of the cash payments when given the opportunity to do so goes a long way, in my view, to supporting my position that the financial dealings between Mr. Schreiber and Mr. Mulroney were inappropriate," Mr. Oliphant said.

He included tough words in his report about the conduct of Mr. Mulroney, the prime minister of Canada from 1984 to 1993, during an examination as part of his lawsuit against the government of Canada. Mr. Mulroney has justified his answers at the time, in which he failed to disclose his dealings with Mr. Schreiber, by saying that the question was not asked.

"For Mr. Mulroney to attempt to justify his failure to make disclosure in those circumstances by asserting that [federal lawyer Claude]Sheppard did not ask the correct question is, in my view, patently absurd," Mr. Oliphant said.

In the House of Commons, the Liberals asked the government to find a way to recoup the $2-million settlement that was used to cover Mr. Mulroney's legal costs as part of his lawsuit over the Airbus matter. But the Conservatives said it's too early to respond to Mr. Oliphant's report.

"The government will be reviewing these recommendations," Justice Minister Rob Nicholson said.

Mr. Mulroney has explained his cash dealings as an error in judgment - a statement that held no sway with Mr. Oliphant.

"I am driven to conclude that it is virtually impossible that Mr. Mulroney committed the same significant error in judgment on three separate occasions. It seems to me that, given Mr. Mulroney's education, background, experience, and business acumen, his every instinct would have been, and should have been, to document the transaction in some manner," he said.

Mr. Oliphant went on to say: "I therefore conclude that the reason Mr. Schreiber made the payments in cash and Mr. Mulroney accepted them in cash was that they both wanted to conceal the fact that cash transactions had occurred between them," Mr. Oliphant said.

He also did not give any credence to the assertion that the dealings were appropriate because Mr. Mulroney was no longer prime minister when he accepted the money.

"In my view, therefore, Canadians are entitled to expect that the holders of public office will be guided in their professional and personal lives by an ethical standard that is higher and more rigorous than the norm," Mr. Oliphant said.

"Those expectations do not expire when the political career of a holder of public office comes to an end," he said.

One of Mr. Oliphant's tasks was to find the source of the funds that were provided by Mr. Schreiber to Mr. Mulroney. Agreeing with evidence presented during the public hearings, Mr. Oliphant concluded that the money did come from commissions awarded to Mr. Schreiber in relation to Air Canada's purchase of Airbus planes.

Mr. Oliphant ended his report by calling for a toughening of the rules governing today's members of Parliament and government officials, in part by calling for further post-employment disclosure.

"Put bluntly, if the events that prompted this Commission of Inquiry were to occur today, I am not persuaded that the Conflict of Interest and Ethics Commissioner would learn about them, because there is no process or procedure in place that would allow her to detect them," he said.

Amongst the recommendations, he believes former and current public office holders should be required to disclose the companies and people that are hiring, or proposing to hire them.

He is also calling on the Harper government to make it an offence if a former public office holder violates the Act.

The roots of the twisted and complicated affair extend back more than two decade ago, when it was revealed that a secret side deal had been arranged in relation to the purchase of 34 jetliners from Europe's Airbus Industrie by Air Canada, which was a Crown corporation at the time.

As each plane was delivered across the Atlantic Ocean, Airbus funnelled millions of dollars to a shell company in the tiny tax haven of Liechtenstein. The company, International Aircraft Leasing, was under the control of Mr. Schreiber - who, at the time, was an unknown lobbyist and fundraiser connected to the then federal Progressive Conservative party. Mr. Schreiber also lobbied for two other European manufacturers - Thyssen AG, which sought government support for an armoured vehicle factory, and Messerschmitt-Bolkow-Blohm, a helicopter company that negotiated a contract with the coast guard in the late 1980s.

The RCMP launched an investigation into the secret commissions, and in order to obtain Mr. Schreiber's banking records in Switzerland, sent an intergovernmental letter requesting access to the documents. The letter, which stated that Mr. Mulroney and the late Frank Moores, a former Newfoundland premier and Airbus lobbyist, were part of a conspiracy to defraud the government of Canada, was leaked to the press.

The day after the letter hit the newsstands, Mr. Mulroney announced he was suing the federal government for defamation. He testified, as part of his lawsuit, that he had nothing to do with the Airbus purchase as prime minister and that since leaving office, he had met Mr. Schreiber "once or twice" for a "cup of coffee."

In 1997, the government and the RCMP apologized to Mr. Mulroney and agreed to pay him $2.1 million for his legal fees and public relations costs.

Good fortune and vindication, however, did not follow Mr. Schreiber, and in 1999, he was arrested by the RCMP at the request of the German government on charges of tax evasion, fraud and bribery in his native country. With extradition hanging over his head, the Bavarian-born salesman slowly began pulling back the curtain on his relationship with Mr. Mulroney. In 2003, author and lawyer William Kaplan revealed in The Globe and Mail that between 1993 and 1994, the two men had met three times in hotels where Mr. Schreiber gave the former prime minister hundreds of thousands of dollars in cash.

In 2007, The Globe and Mail and CBC's the fifth estate revealed that Mr. Mulroney waited six years to disclose the payments to Canada Revenue Agency, taking advantage of the agency's voluntary disclosure program.

Shortly after those reports, and after Mr. Schreiber filed a detailed affidavit about the payments in a civil case he initiated against Mr. Mulroney in Ontario Superior Court, Prime Minister Stephen Harper announced the creation of a public inquiry. He appointed an independent adviser, University of Waterloo president David Johnston, to craft the terms of reference, who ordered the inquiry to focus on the cash payments, and to not revisit the "well-tilled ground" of the Airbus commissions, that had already been probed by the RCMP.

Mr. Mulroney testified that Mr. Schreiber hired him to promote Thyssen armoured vehicles to international leaders and the United Nations. Two of the men he says he lobbied, former French President Francois Mitterrand and former Russian president Boris Yeltsin, are dead. He also said he promoted the vehicles to the Chinese government, a statement that has been described as implausible by Fred Bild, Canada's ambassador to China at the time of the alleged lobbying.

Mr. Schreiber testified that he hired Mr. Mulroney, a Conservative, to lobby the then Liberal governments of Canada and Quebec to support a Thyssen factory in Cape Breton. He also testified that he kept paying Mr. Mulroney instalments of $100,000 -- Mr. Mulroney says they were $75,000 installments -- even though there was no evidence the former prime minister was doing any work.

The Schreiber saga
August 2, 2009
Questions left unanswered as Schreiber jailed for 8 years
May 6, 2010 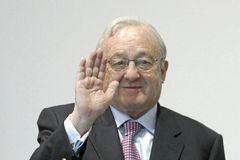 Follow Daniel Leblanc and Greg McArthur on Twitter @danlebla @McarthurGreg
Report an error Editorial code of conduct
Due to technical reasons, we have temporarily removed commenting from our articles. We hope to have this fixed soon. Thank you for your patience. If you are looking to give feedback on our new site, please send it along to feedback@globeandmail.com. If you want to write a letter to the editor, please forward to letters@globeandmail.com.
Comments are closed