Mr. Mulroney, whose Progressive Conservative government signed the original Canada-U.S. free-trade deal in 1988, said the Trudeau government is well-placed to renegotiate the North American Free Trade Agreement with the United States and Mexico but officials should refrain from responding to incremental developments in public.

"What we should do is what we've been doing: We keep our heads down and our mouths shut," said Mr. Mulroney, speaking at a conference on Friday hosted by left-leaning think tank Canada 2020.

Tough trade: What Canada can learn from NAFTA's flaws

Opinion: Canada can become a global beacon for fair trade between nations

"Don't take the bait. We deal with this at the negotiating table."

Mr. Mulroney, who is friends with U.S. President Donald Trump and owns a home nearby the President's in Palm Beach, Fla., has been offering advice to the Trudeau government on renegotiating the trilateral trade deal, with talks expected to start as early as August.

When the process begins, Mr. Mulroney said one of the most important words for Canada's negotiators is "no."

He said Canada has an economy worth almost $2-trillion with 36 million people, which is comparable to the Soviet Union, which has 138 million people.

"Hell, the Americans should be more fearful of us than Russia."

He praised Mr. Trudeau for putting together a "highly talented and capable team" to handle the trade file, including Foreign Affairs Minister Chrystia Freeland.

"I've known Justin since he was two years old," Mr. Mulroney said. "I warned the Conservatives: Be careful, don't underestimate this guy. There's a hell of a lot more there than you fellas give him credit for."

He also paid tribute to former interim leader Rona Ambrose, who frequently travelled to Washington to meet with lawmakers and advance Canada's interests on the trade front. She has since joined D.C.'s Wilson Centre as a global fellow.

"There's no Conservative way to negotiate a comprehensive free-trade agreement with the United States, and there's no Liberal way to do it. There's only a Canadian way," Mr. Mulroney said.

"I think there are times when political parties should lay down their arms and support a national initiative. This is one of them."

Mr. Mulroney said he spoke with Mr. Trump's adviser and son-in-law, Jared Kushner, who said the United States was impressed Ms. Ambrose's Conservatives offered to help the Liberals advocate for Canada's interests on the trade file.

"We're going to need all the help we can get," he said.

"The enemy is not trade. The enemy is technology," he said, noting when he was in office, there were no cellphones or Internet.

"Now technology and automation are displacing jobs all over the place, and the challenge is to reconstruct the economy."

While Mr. Trump has pledged to bring back the coal industry to the American Midwest, Mr. Mulroney said that would be a "Band-Aid solution."

"The answer is not that. It is in a greener economy, and it is in training and retraining of employees to handle new jobs that are being created," he said.

Speaking to reporters after his speech, Mr. Mulroney said he's spoken to Mr. Trump's senior team this week but not the president himself, who is reportedly facing an investigation from special prosecutor Robert Mueller for obstruction of justice relating to questions about Russian interference in the American election.

When asked if the political turmoil south of the border could impact the negotiations, he said "anything's possible."

"But this is so important to the United States and to Canada and to Mexico, that my guess is that the governments – when they start at the table – they're going to want to make certain they conclude an important new agreement," he said.

In this Tennessee town, NAFTA is a dirty word Subscriber content
November 12, 2017 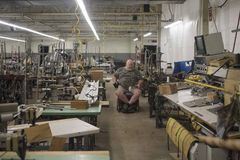