Donald Trump, who threatens to tear up the North American free-trade agreement if elected president, is rising in the polls, raising questions about the future of Canada's most important trading relationship.

But the prime minister who helped negotiate the landmark agreement predicts that, one way or another, NAFTA will endure.

"Mr. Trump's election as President of the United States is far from guaranteed," Brian Mulroney said on CTV's Question Period, which aired Sunday.

Mr. Mulroney believes that Mr. Trump is surfing a wave of populist discontent over illegal immigration and fears of terrorist attack, which was sufficient to secure him the Republican presidential nomination.

"But I don't think something like that, that negative, carries you to the White House," he maintained.

Even if Mr. Trump – who has called NAFTA "one of the worst trade deals ever signed in the history of our country; perhaps the worst ever signed in the history, frankly, of the world" – should prevail, Mr. Mulroney predicted that "someone is going to point out to him that Canada is the number-one destination for American goods and services from 38 of their 50 states."

Scrapping NAFTA, he added, would be like "cutting off your nose to spite your face."

Mr. Trump, the New York entrepreneur who has trailed Democratic presidential nominee Hillary Clinton since the two parties held their conventions in July, is trending upward in the polls, after his statesmanlike appearance beside Mexican President Enrique Pena Nieto in Mexico City last week.

And Ms. Clinton has been plagued by the release of more e-mails that she inappropriately kept on a private server when she was secretary of state.

"One side has logic, facts and a certainty about its own correctness," Mr. Bricker said in an e-mail exchange. "The other side has raw emotion and popular appeal.

"As for the two candidates, one is news and the other just isn't."

Two other polls released last week confirm the trend. An Investor's Business Daily poll has Ms. Clinton ahead by one point, while a USC Dornsife/Los Angeles Times daily tracking poll has Mr. Trump up by just under three points.

Other polls show the Democrats holding onto their lead. The latest Fox News poll has Ms. Clinton up by six points in a two-way matchup (that lead shrinks to two if Libertarian and Green candidates are added) and an Economist/YouGov poll has her up by five.

What can be said with some confidence is that the healthy lead Ms. Clinton enjoyed over Mr. Trump through most of August appears to be in jeopardy.

Even if the Democrats win the presidential election on Nov. 8, NAFTA's future could be troubled, for Ms. Clinton has also expressed concerns about the pact, blaming it for the loss of manufacturing jobs in the United States.

Nonetheless, circumstances favour the survival of the accord between Canada, Mexico and the United States, despite these dark clouds.

American politicians often oppose NAFTA when running for office, then support it after they win, including Barack Obama. President Trump would also have to convince Congress to terminate the treaty.

In the very worst case, if the United States were to withdraw from NAFTA, the original Canada-U.S. free-trade agreement that Mr. Mulroney and Ronald Reagan signed in 1988 would remain in effect.

In any case, losing NAFTA could be the least of Canada's troubles if Mr. Trump wins. The TV celebrity also wants to impose tariffs on Chinese imports, which could quickly escalate into a global trade and currency war, followed by a global recession.

He is also threatening to abandon security guarantees with Japan and South Korea, and to renege on America's commitments to European defence under NATO.

Canada's trade woes might not amount to a hill of beans in the crazy world that Donald Trump envisions should he become President of the United States of America.

Trump renews threat to leave NAFTA in speech on economy
May 16, 2018 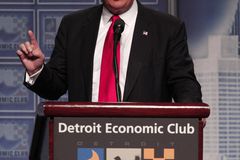