When Naheed Nenshi was elected to lead the city of Calgary in October, headlines hailed him as Canada's first Muslim mayor. Mr. Nenshi, 39, is an Ismaili Muslim, born of parents of South Asian descent who immigrated to Canada from Tanzania.

But what makes him really interesting is not his religious background or the colour of his skin. It is his challenge to the way Canadians build their cities.

Mr. Nenshi has been thinking about cities and how they work for most of his adult life. As a well-travelled, Harvard-trained management consultant, he learned to love great world cities like Barcelona and Rio de Janeiro, London and New York. His favourite is Melbourne, Australia.

He can talk your ear off about the success of Curitiba, Brazil, with dedicated bus-ways for carrying commuters. He can explain how a "tax increment finance regime" can help pay for urban infrastructure. His 3-Ds urban philosophy calls for cities with density, diversity and a sense of discovery.

Seldom has a Canadian mayor come to office with such a deep understanding of urban issues. Now, after years on the outside as a business professor, activist and newspaper columnist, he suddenly has a chance to put those ideas into action.

But can he get Calgary to buy in? To an outsider, at least, sprawling, car-dependent Calgary seems like an unlikely place to realize Mr. Nenshi's Jane Jacobs-inspired ideas about livable cities.

In a 2002 report called Building Up: Making Canada's Cities Magnets for Talent and Engines of Development, he argued that the successful city of the future will be a place in which "people live where they work and play. Density is high. Public transit is a preferred choice. Young people can afford to live downtown. Classes and socio-economic backgrounds are mixed..."

Calgary seems to violate every one of those principles. With no natural barriers - no lake like Toronto's, no mountains and sea as in Vancouver - Canada's fourth biggest city sprawls north, south, east and west across the rolling brown foothills of southern Alberta.

Density is low. With the same sized footprint as the five boroughs of New York City, Calgary has one-tenth the population.

Though its C-Train light-rail network provides swift service to downtown, 67.6 per cent Calgarians commute by car and just 16.8 per cent by transit, according to the last census.

Some young people can afford to live downtown, but not many do. The proliferation of high-rise condominiums that has transformed downtown Toronto and Vancouver has only just begun in Calgary. More than 95 per cent of real estate development is in the suburbs, where vast new subdivisions with names like Tuscany and Mahogany stretch into the distance.

As for mixing, Mr. Nenshi says that in his own immigrant neighbourhood of Coral Springs in the city's northeast, the proportion of non-white residents has soared to 82 per cent from 50 per cent a few years ago, while in the southern half of Calgary he says all but eight per cent are white.

Yet none of this discourages the effervescent new mayor, an unlikely come-from-behind winner in October's Calgary election. He insists that Calgary can, and must, change and he is determined to lead Canada's fastest growing city into a more sustainable, more truly urban future.

In his high-ceilinged office in Calgary's old city hall building, he lays out a three-point plan.

First, develop unused downtown lands. Calgary has a bustling downtown with thickets of office towers, including the rising Norman Foster-designed skyscraper, the Bow. But there is a lot of barren, underused space in between. Mr. Nenshi has high hopes for the East Village, a once-sketchy area that is to be revived with a new music centre and housing projects.

Second, encourage "spot intensification" of residential neighbourhoods. A recent study showed that 80 per cent of neighbourhoods were actually losing population density as householders saw their children grow up and move out. He would like to see developers build high-rises around transit stops and redevelop low-rise strip malls into mid-rise retail and residential buildings.

He would legalize so-called secondary suites: rental apartments in single-family homes. There are thousands, perhaps tens of thousands of such suites and Mr. Nenshi wants to acknowledge and even encourage them, not keep them in the shadows.

Third, build smarter suburbs. That means more subdivisions with a mix of housing types - single-family, townhouse, apartment block - in place of uniform tracts of identical, knock-off houses. He points to the success of Garrison Woods, a new neighbourhood on former military lands with double the density of a traditional suburb. The developer designed it to be walkable, with shops and schools nearby.

Mr. Nenshi wants to charge developers higher fees for building on the city's edges, arguing that the city effectively subsidizes suburban development by charging too little to supply infrastructure and services.

It's not that he wants to abolish suburbs. "We have to recognize that a lot of people want to live in them," he says. "I'm not interested in forcing everybody to live in a high-rise building downtown. This isn't Hong Kong." He just wants the price of a place in the suburbs to reflect the true cost of putting it there.

None of this will be easy. Developers, a powerful force in Calgary, and big contributors to local political campaigns, say they are already paying plenty in taxes and fees.

Michael Flynn, executive director of the Urban Development Institute, an industry lobby, says it would be "social engineering" to try to change the housing choices of Calgarians. Like it or not, "Calgary is very much an auto-oriented city. People like to go skiing in the mountains on the weekends."

"The mayor has a very significant challenge in front of him," says Doug Cassidy, an executive with Canada Lands, which developed Garrison Woods. "The majority of development here has been based on the suburban sprawl model. Turning that around will not be an overnight order."

Intensifying neighbourhoods sounds good until the neighbours get wind of it. The city ran into flak when it unveiled plans to covert a low-density site, Brentwood Village Mall, into a new community of mid-rise and high-rise buildings, taking advantage of a nearby light-rail station. Residents groups worried about overcrowding and traffic congestion.

David Watson, Calgary's chief planner, concedes that developers would rather build "in a piece of dirt at the edge of the city, where you only have to deal with the planning department and a few gophers."

Despite all these hurdles, Mr. Nenshi has a couple of advantages as he presses forward with his vision for a new Calgary. The first is his own skill as a salesman. Open, engaging and almost supernaturally articulate, he impressed Calgarians during the election campaign by daring to speak to them in detail about complex urban issues - an approach that he called "politics in full sentences."

His enthusiasm for Calgary is infectious. Taking a reporter on a tour of the East Village, he shows off an "incredibly brilliant" new pier on the bank of the Bow River where people can watch concerts and dangle their feet in the water while listening to the gurgling of the river - a sound effect created by boulders specially positioned to make the river sing.

His second advantage is the Calgary spirit. Calgarians pride themselves on being creative, entrepreneurial and open to change. The city has gone through several transformations in its history, from railway hub to cow town to oil town to white-collar service centre.

"We are unchallenged by history," says the mayor, "and we have an ability to innovate and pick and choose the best off different places."

With people arriving from all over Canada and the world to take profit from the robust Alberta economy, Calgary has become a much more cosmopolitan place, with a population over 1 million, a thriving downtown arts scene and street festivals in the suburbs that echo with the sound of South Asian bangra music.

Attitudes about city living are changing. One penthouse condo sold for $4.1-million last month, a Calgary record and a sign that high-rise living is gaining appeal. Despite all the fuss over the Brentwood redevelopment, two condo towers in a local project sold out when they went on the market.

"When did Jane Jacobs write the Death and Life of Great American Cities? We're getting there, just 40 years later," says Mr. Nenshi.

When a project called Imagine Calgary asked residents what they wanted from their city in the future, it found most wanted to live in a place where they could walk to the store, walk their kids to school, get by with only one car and be surrounded by different kinds of people.

"If everyone wants that, why aren't we building that?" says the mayor.

It's a good question, and not just for Calgary. Cities across Canada are trying to reinvent themselves on denser, more modern lines. If Naheed Nenshi has his way, Calgary will show them how. 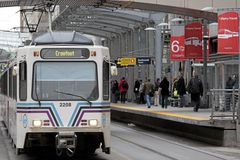 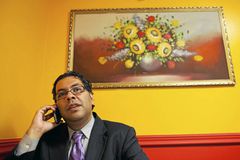 Naheed Nenshi, Calgary's new mayor
October 22, 2010
Opinion
Why Hogtown envies Cowtown
October 21, 2010
Follow Marcus Gee on Twitter @marcusbgee
Report an error Editorial code of conduct
Due to technical reasons, we have temporarily removed commenting from our articles. We hope to have this fixed soon. Thank you for your patience. If you are looking to give feedback on our new site, please send it along to feedback@globeandmail.com. If you want to write a letter to the editor, please forward to letters@globeandmail.com.
Comments