The New Democratic Party Leader was responding Sunday to an accusation by Stephen Harper that the NDP's "not-so-hidden agenda" is to hamper development of the country's natural resources.

The Conservative Leader made the allegation earlier in the day at an Ottawa campaign stop after a high-profile NDP candidate in Toronto told a CBC panel last week that curbing oil-sands production might be necessary for Canada to meet its emission-reduction targets.

Mr. Mulcair said his government would bring in "overarching" sustainable development laws to force oil companies to "internalize" the costs of their emissions and pay for the pollution they create. He said that the governing Conservatives have jeopardized resource development across the country by gutting environmental laws that the public and the environment need.

"Canada's reputation is being hurt on the world stage, simply because we've been working consistently against the planet," he said. "[Mr. Harper has] already decided he doesn't want to do anything about climate change and found every excuse in the book to continue to justify his inaction."

Liberal Leader Justin Trudeau, who, like Mr. Harper, was also campaigning in Ottawa on Sunday, said the exchange between the Conservative Leader and Mr. Mulcair proves they have both taken extreme positions. The lack of leadership on the environment demonstrated by Mr. Harper and his Conservative government over the past 10 years has forced four large provinces to step into the void and put a price on carbon, said Mr. Trudeau.

The political controversy was sparked Friday, when Linda McQuaig, a well-known author and NDP candidate in Toronto Centre, told a CBC television panel discussion that "a lot of the oil-sands oil may have to stay in the ground," if Canada is to meet its climate change targets. (The party later stated that Ms. McQuaig was not referring to its official policy, but to an international report that said oil-sands production might have to be curtailed to meet climate-change targets.)

Mr. Harper said the comments by Ms. McQuaig are reflective of the NDP's overall attitude about reaping the benefits from natural resources.

"This is a party, for instance, in Quebec, in Northern Ontario, that binds itself with groups that are trying to shut down the Canadian forest industry," he said. "The NDP is consistently against the development of our resources and our economy."

The Conservative Leader also criticized Mr. Mulcair for going out of the country to "lobby against Canadian projects," referring to a 2013 speech he made in Washington against the Keystone XL pipeline.

Walking the difficult line between environmental protection and the economic benefits of oil-sands development could prove tricky for party leaders during a long election campaign. The NDP risks losing support in Alberta – where it is hoping to make gains – if it is perceived to be standing in the way of the energy development that will create jobs.

Calgary Conservative Michelle Rempel said constituents raised Ms. McQuaig's comments while she was campaigning on Saturday. "It came up at the doors three times without me even saying anything about it," she told The Canadian Press. "So people are very concerned, and rightly so, about economic stability."

Kyle Harrietha, the Liberal candidate in the Alberta riding of Fort McMurray-Cold Lake where the economy is largely dependent upon the oil sands, accused the New Democrats of having multiple stands on the issue of development, depending upon their audience.

"Mr. Mulcair is pro-oil sands and pro-pipelines in one part of the country, and anti-resource and anti-pipeline in another," Mr. Harrietha said in a statement. "We must work together to get our resources to market and continue to grow our economy so all Canadians can have a real and fair chance at success."

What next for the leaders, after their first debate?
August 7, 2015 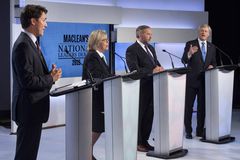 Follow Mike Hager and Gloria Galloway on Twitter @MikePHager @glorgal
Report an error Editorial code of conduct
Due to technical reasons, we have temporarily removed commenting from our articles. We hope to have this fixed soon. Thank you for your patience. If you are looking to give feedback on our new site, please send it along to feedback@globeandmail.com. If you want to write a letter to the editor, please forward to letters@globeandmail.com.
Comments