By plugging recent national polls into our model, we can calculate the likelihood of certain results if an election were held today. Here are three notable outcomes.

Probability of NDP win: 51.9 per cent

The story of the past few months has been the resurgence of the New Democrats, who have now led nine polls in a row by as much as 8 percentage points. In 51.9 per cent of the simulations run based on the latest survey data, the federal NDP win the most seats. Before May, they had not led even two polls in a row since the fall of 2012. The Conservatives, meanwhile, were favoured to win the most seats 47 per cent of the time, while the Liberals won in 2 per cent of the simulations. (Numbers may not add up to 100 due to ties.)

The party's surge seems to be found throughout the country, with their fortunes importantly revived in Quebec where the party will hope to recreate the 2011 near-sweep of the province. The party is now more competitive in Alberta, as well as in seat-rich Ontario. 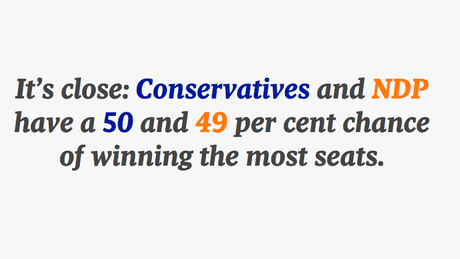 Probability of majority government: 0.9 per cent

Majority governments were found in just 9 simulations out of 1,000 (0.9 per cent). However, the high likelihood of a minority government this time is very different from what happened between 2004 and 2008. At that time, there were two parties battling for the lead – the Conservatives and the Liberals – with two significant but smaller parties drawing considerable support. This time around, the situation seems to be a legitimate three-way race, which historically has been rare. The last time a third party even won 20 per cent of the popular vote was 1988.

This three-way split has two consequences. It generally leads to some razor-thin margins of victory in large numbers of ridings, which means that turnout and the vagaries of constituency boundaries will be critical in determining the outcome. The split also means that small shifts of 2 or 3 percentage points from one party to another can result in every government/opposition combination you can imagine.

Probability of Bloc winning at least 12 seats: 28.5 per cent

The return of Gilles Duceppe as Bloc Québécois Leader was a surprising development for a party that seemed largely moribund. Its fortunes have revived somewhat since the announcement, and the BQ now has a 28.5-per-cent chance of regaining official party status (12 seats) in the House of Commons. With both NDP and Liberal polling numbers elevated compared to the 2011 election, it will difficult for the party to recreate the 40-plus seats of the past. A key worry for the NDP is that any BQ re-emergence will come primarily at the expense of New Democrats, who performed especially well in traditional Bloc territory.

Paul Fairie is a political scientist at the University of Calgary who studies voter behaviour.