The federal government is facing calls to improve the way it funds infrastructure projects after a Globe and Mail analysis found that ridings held by Liberal MPs are receiving a disproportionate share of federal funds.

While the Liberal government insists politics plays no role in project decisions, policy experts note that the overall structure of federal infrastructure programs can have the effect of favouring Liberal ridings.

The calls come as Federal Infrastructure Minister Amarjeet Sohi is in the final stage of negotiations with the provinces on the parameters of Ottawa's second phase of infrastructure spending, worth $33-billion over the next decade.

NDP infrastructure critic Brigitte Sansoucy raised the issue on Monday in the House of Commons during Question Period.

"The Globe and Mail has uncovered a disturbing trend in the way that the Liberals – like the Conservatives before them – award infrastructure contracts. Contracts are granted in Liberal ministers' ridings, while once again, rural ridings get shafted," she said.

"Can the government assure us that the selection criteria for phase 2 will look at the quality of the project and not the party affiliation of the riding?"

Mr. Sohi said he rejected the NDP's accusations and said Ottawa works closely with other levels of government to meet their needs.

"Provinces and municipalities and territories are responsible for the selection of projects and we work with them to go through rigorous criteria to approve them," he said.

A Globe analysis of nearly 6,000 infrastructure projects announced by the Liberal government found that ridings held by Liberal MPs received a disproportionate share of federal funds announced to date.

Infrastructure Canada recently published an interactive online map with the general locations of the projects, which are worth a combined $14.4-billion.

The Globe analyzed how those project locations are distributed across federal ridings.

The findings provide a general guide of spending trends. However the fact that many large projects – such as public-transit systems – will benefit more than one riding means that the results are not a precise assessment of how the benefits of federal infrastructure spending are spread across the country.

The Liberal government insists that the political stripe of a particular riding plays no role in whether specific projects are approved.

Policy experts say while that may be true, government decisions at the outset about how much funding each category of funding will receive – such as prioritizing public-transit projects – has the effect of directing more spending to urban ridings that are predominantly held by Liberal MPs.

Jenny Gerbasi, president of the Federation of Canadian Municipalities, said the federal government has generally done a good job of balancing the needs of rural and urban communities.

Bev Dahlby, a distinguished fellow with the University of Calgary's School of Public Policy, said an economic argument could be made for favouring cities when it comes to infrastructure if it produces national benefits in terms of increased productivity, wages and tax revenue.

"There's more likely to be these kind of national benefits in the major infrastructure projects in the larger centres," he said. 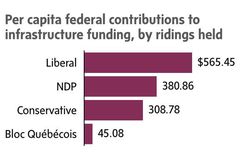 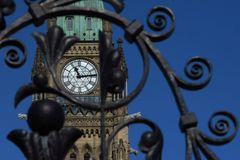 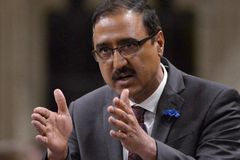