The federal government offered no apologies and little hope of quick redress to dozens of Canadians who are seeking federal aid to cope with the crippling effects of the drug thalidomide.

Health Minister Rona Ambrose told The Globe and Mail that she has not yet been briefed on a report sent to her office in September that details the health crisis faced by 95 Canadians whose mothers took the federally approved drug during pregnancy in the early 1960s.

The report, submitted by the Thalidomide Victims Association of Canada, says survivors are enduring growing hardships, including debilitating pain, from the overuse of their deformed limbs. They are seeking a federal "survivor fund" to help deal with their medical and care needs.

As the opposition pressed the Conservative government in the House to relieve the victims' "immense pain and suffering," Ms. Ambrose confirmed that her office received the group's submission but she was unaware of what was in it.

"I don't know the specifics of what is in the proposal," Ms. Ambrose said on Monday after a government funding announcement in Toronto. 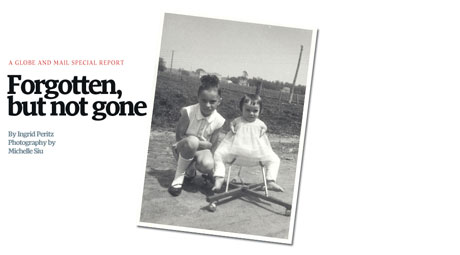 After months of stonewalling the victims' group, Ms. Ambrose says her office is now open to meeting them. The Thalidomide Victims Association has been trying to obtain a meeting with Ms. Ambrose since March. So far, it has succeeded only in speaking to health-department civil servants.

"I'm willing to obviously look further into what their request is," Ms. Ambrose said. "I'll have to get more information from the department's meeting with them." She would not say whether the government is open to offering the victims an apology.

Mercédes Benegbi, head of the Montreal-based victims group, said the government appears unaware of the urgency of the problem. Many victims are unable to work and some are increasingly reliant on potent painkillers.

"We sent our proposal to Minister Ambrose two months ago and we never got any feedback," she said from Ottawa, ahead of a planned news conference on Tuesday. "They don't understand that this is a crisis. We can't wait for months and months. She should engage in a conversation with us."

The victims of thalidomide, promoted as a "wonder" drug in the early 1960s to treat insomnia and morning sickness in pregnant women, left an unknown number of Canadian babies with birth defects such as flipper-like hands, stunted legs, deafness and internal organ damage. Nearly all in their early 50s now, many of Canada's "thalidomide babies" are in chronic pain and cannot afford basic care. To date, Ottawa has offered only a single payout to the victims of between $52,000 to $82,000, which sufferers call a pittance. Unlike schemes in Britain and Germany, Canada offered no long-term support and victims say the one-time payment is long gone.

The group argues that Ottawa still bears a moral responsibility toward victims because thalidomide was approved by federal officials, who didn't withdraw it for months despite emerging signs of its health risks.

"Many Canadian families suffered tragic consequences as a result of that decision," NDP whip Nycole Turmel said during Question Period. Speaking of the drug's victims, she said, "for decades, they have struggled alone but it should not have to be that way."

The NDP is sponsoring a motion supported by all opposition parties calling on the government to provide support to survivors. The party hopes it will get all-party support. The Conservative government will review the NDP motion, a spokesman to Ms. Ambrose said.

So far, the Conservatives have stuck to the message that the thalidomide tragedy helped usher in tighter drug-safety regulations in Canada, and have sidestepped the fact that the tragedy's victims continue to pay for the catastrophe. Ms. Ambrose echoed the government line. "This very tragic event from the sixties reminds us how important drug safety is," Ms. Ambrose said. "Health Canada has come very far. We have, in fact, many believe one of the safest drug-approval systems in the world, but we always have to remain vigilant."

The Tories have carefully avoided committing to supporting the drug's victims ever since The Globe and Mail first asked the question as part of a report on the drug's impact last week. The thalidomide victims' group is seeking $100,000 a year on average for survivors, plus a lump-sum payment. 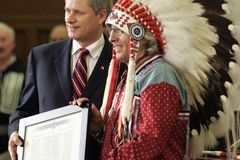 Follow Ingrid Peritz and Renata D’Aliesio on Twitter @iperitz @renatadaliesio
Report an error Editorial code of conduct
Due to technical reasons, we have temporarily removed commenting from our articles. We hope to have this fixed soon. Thank you for your patience. If you are looking to give feedback on our new site, please send it along to feedback@globeandmail.com. If you want to write a letter to the editor, please forward to letters@globeandmail.com.
Comments