A New Brunswick MP who was a minister of state for Indian affairs during the Mulroney years has been tasked with steering the federal government through what what could be a prolonged period of first nations unrest.

Bernard Valcourt was sworn in as Minister of Aboriginal Affairs and Northern Development at Rideau Hall early Friday morning. He replaces John Duncan, who resigned from cabinet this month over an inappropriate letter he wrote to the Tax Court two years ago.

The change in ministers comes at a time when first nations are demanding an increased share of resource revenue – threatening to blockade developments that are central to the Harper government's plans for economic recovery. Native protesters are also targeting federal legislation they say will negatively affect their communities.

Mr. Valcourt, who refused requests for interviews, used his first public statement as minister to praise his government's actions on behalf of indigenous peoples.

"We have built new schools, invested in clean drinking water systems, built thousands of new homes, increased funding for services for the most vulnerable members of first nations communities, and invested in hundreds of projects to link aboriginals with job training services," he said.

"Our government remains committed to working with those aboriginal leaders who want to work with the government of Canada to create jobs and growth in their communities."

But, despite a historic apology by Prime Minister Stephen Harper in 2008 for the treatment of aboriginal children at church-run residential schools, the trust between Canada and its indigenous people is low.

A face-to-face discussion between Mr. Harper and a delegation of the Assembly of First Nations last month turned sour when chiefs who were not invited complained about the format. And a follow-up meeting between the Prime Minister and ANF National Chief Shawn Atleo that was supposed to take place shortly thereafter has yet to be scheduled.

Mr. Harper, meanwhile, has promised that his office will take a more direct hand in dealing with first nations issues, leaving open the question of how much actual influence Mr. Valcourt will have as he tries to calm the turbulent waters.

But at least one chief believes Mr. Valcourt is up to the job.

"I think it's going to be a really brief learning curve for the minister to catch up on the issues facing us," said Roger Augustine, the AFN Regional Chief for New Brunswick. "I think Bernard Valcourt can handle this and we are anxious to get down and get to work."

Mr. Valcourt was first elected to the House of Commons in 1984 as a Progressive Conservative under Brian Mulroney and, from 1987 to 1989, was minister of state for Indian affairs and northern development.

He became minister of consumer and corporate affairs but was in a motorcycle accident while driving drunk and lost both an eye and his cabinet seat. He was eventually brought back to the cabinet table, then lost his seat when the Progressive Conservatives were all but wiped out in the election of 1993.

Mr. Valcourt then moved to provincial politics and became the leader for the Progressive Conservatives in New Brunswick.

He returned to Ottawa in 2011 as the MP for Madawaska-Restigouche and has been the minister of state for the Atlantic Canada Opportunities Agency and La Francophonie.

He was also the associate minister of national defence, a job that has gone to Kerry-Lynne Findlay, the MP for the Vancouver-area riding of Delta-Richmond East, restoring the B.C. representation that was lost with Mr. Duncan's departure.

Jean Crowder, the aboriginal affairs critic for the NDP, said it will be interesting to see whether Mr. Valcourt can push back on the agenda of his government that has angered first nations and "whether or not he's got enough influence to change the channel."

Carolyn Bennett, the Liberal critic, said the Mulroney government did many things right on the indigenous file, including holding the Royal Commission on Aboriginal Peoples, "so we have to let him get engaged and then see how he performs." 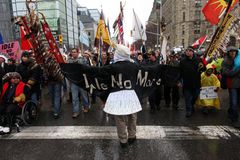 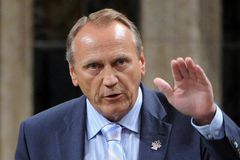 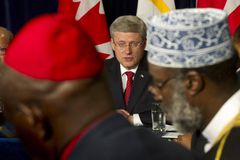 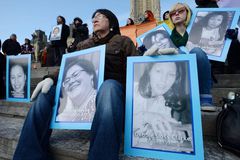