A former diplomat with a mop of blonde hair, Chris Alexander is the poster boy for the "generational change" Stephen Harper heralded this week as he restocked his cabinet with new blood to convince Canadians to take a fresh look at a government in its eighth year of power.

Mr. Alexander, 44 and elected to the House of Commons for the first time slightly more than two years ago, vaulted into a mid-level cabinet position as Immigration Minister in Mr. Harper's July 15 shuffle. He's one of eight new faces in the inner circle.

"I'm truly somewhat daunted," Mr. Alexander said in an interview with The Globe and Mail. "It's a big challenge and big shoes to fill."

Telegenic and well spoken, the boyish-looking Ajax-Pickering MP has made a name for himself both inside and outside the Prime Minister's Office as a forceful spokesman for the Conservatives since taking his seat in 2011. He has been increasingly relied upon to appear on TV and defend the Tories on everything from the F-35 fighter controversy to the Senate expenses scandal.

Now the father of two has been handed an even bigger standard to bear leading up to an expected 2015 election.

He has joined the Harper cabinet ministers in the Greater Toronto Area who are expected to sell the Conservative message in the region and across Ontario – where recent polls suggest party support is down 13 to 14 percentage points from the share of the popular vote the Tories received in the 2011 election.

As the minister responsible for immigrants, Mr. Alexander says he will work alongside the government's ethnic outreach czar, Jason Kenney, to connect with new Canadians.

In the last vote, the Tories captured more than two-thirds of the seats in the GTA, home to fast-growing suburban neighbourhoods full of immigrant populations. The party succeeded because Mr. Kenney, the former immigration minister, wooed new Canadians with the Conservative message.

The GTA remains crucial to a Harper majority, particularly because the Tories have failed to make inroads in Quebec, a province that has traditionally been part of the formula for winning control of the Commons, but continues to rebuff the Conservatives.

Stakes will be even higher in 2015. The GTA will receive another 11 seats, for a total of 58 ridings, under a riding boundary redesign to reflect its increased population. The NDP or the Liberals must capture this vast suburban swathe to defeat the Tories.

At 34, Mr. Alexander was Canada's first resident ambassador in Afghanistan in 2003, and in 2011 was a star candidate for the Conservatives.

The Tories recruited him through Ian Brodie, a former Harper chief of staff and long-time friend, and Mark Cameron, a former PMO aide, although the MP, who worked for the United Nations in Afghanistan after his ambassadorship, said he approached them. "I went to them and said I was interested, when I come back, in taking this path."

Mr. Alexander said he took a ribbing this week from Foreign Affairs Minister John Baird, a cabinet veteran, over his billing as one of the young guns in cabinet.

"John Baird kept coming up to me this week and saying, 'We're being portrayed as the old guys and you're [being portrayed] as the young guys. You're actually six months older than I am,'" Mr. Alexander recounted, laughing.

"So everything is relative … I'm much newer to elected politics. We need a mix."

The MP is the third generation of his family in public service. His father, a lawyer, was a senior official in the Ontario government, and his grandfather was mayor of Huntsville, Ont., in the heart of Ontario's Muskoka cottage-country region.

Asked about the job of rebuilding support for the Conservatives in Ontario, Mr. Alexander said he believes voters are worried about economic stability and will respond to the Tory government's conservative-minded solution: deficit reduction, low taxes and efforts to boost skills training.

He said the Conservatives have a job to do in extolling their record over the past two years and contrasting themselves with their political rivals.

"We have to keep working door-to-door as well as across the GTA and nationally to get our message out about what we've achieved in the last two years and about what the choices are for the future."

He said people across GTA are well-acquainted with the problems facing the international economy. "They come from countries that haven't done well or they have families [elsewhere] or they work for companies that have global interest and global choices to make. So they know how important it is for us to get deficit reduction right, tax framework right, skills training right."

One Conservative insider said Mr. Alexander, whose résumé suggests he is driven to succeed, may be frustrated at Immigration.

"He clearly likes big challenges," the Tory said. "There's very limited space for him to do that in the post he's been given."

Mr. Alexander's department has been dramatically transformed under Mr. Kenney over the past five years.

Mr. Kenney said in a year-end 2012 interview that he believed major reforms in the department would be complete by 2014. The Calgary MP cracked down on fraud and changed the immigration system from one that accepts people on a first-come, first-served basis to one in which newcomers are chosen according to their benefit for Canada.

"There aren't 10 immediate reforms that are achievable within a year because Kenney's been working away on them for five years," the Conservative insider said. 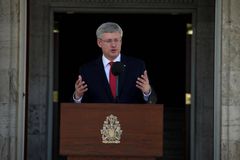